Posted on August 10, 2020 by rolopolobookblog 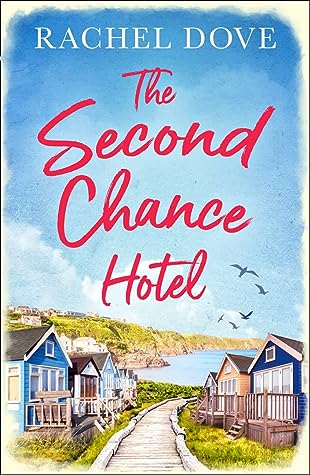 Welcome to Shady Pines, where the sun is shining, the sea is sparkling, and there’s a cosy chalet waiting to be your home away from home. But will April find the new start she’s looking for?

April Statham had it all – until her husband left her for a blonde ten years her junior. Now she’s thirty-five, single, and starting again. So she does what anyone in her position would do: she impulsively invests her life savings in the chalet park she used to visit as a child, on the beautiful Cornish Coast.

The Shady Pines Chalet Park is… ramshackle. But it has one big advantage – it is as far as physically possible from April’s ex, his new fiancée, and her old life. With gorgeous handyman Cillian O’Leary, April is looking forward to the challenge.

As visitors arrive, April realises that Shady Pines isn’t just a second chance for her, it gives Cillian another shot at happiness too.

But when he moves into the chalet next door, April’s painful past starts to catch up with her, and she struggles to reconcile her feelings for Cillian.

Is April’s new beginning destined to end in failure – or will she find new friends, a new life and new love at her second chance hotel?

April Statham’s life was not meant to turn out this way!  At thirty-five, she was meant to still be happily married with a growing family.  As it happens, life doesn’t always turn out the way you mean for it to and adjustments have to be made.  In April’s case, two adjustments included running from the fallout of her old life and investing nearly every cent she had in an old, run-down chalet park.

Some of April’s greatest childhood memories are from her time at the Shady Pines Chalet Park.  Sadly, April’s memories of the site are far better than the site itself.  After years of neglect and incompetent management, April has a load of work to do if she is going to bring the Shady Pines back to its former glory.  Though April has a small budget for repairs and updates, she doesn’t have unlimited funds.  What she also doesn’t have is the skill set necessary to do many of the repairs herself.  To that end, she hires Cillian O’Leary.

Cillian O’Leary has enough baggage for himself and four other adults.  His ex is an addict who does nothing but further damage to their daughter, he doesn’t yet have sole legal custody of his daughter, and he needs a job that will be flexible enough to care for his daughter yet still earn a decent income.  Thankfully, alongside his baggage, Cillian also has all the skills April is looking for in a handyman and her job offer comes with a home for he and his daughter.

From the moment they meet April and Cillian are at odds and often have serious miscommunications.  Cillian is grumpy and wary of women while April is determined and wary of men.  If it weren’t for Martha, the crusty old artist who lives permanently onsite, Cillian and April would likely never get over their issues and realize they actually care for one another.  Working together is difficult, but Martha finds ways – subtle manipulations – to put the two together and force cooperation.  As Martha is playing matchmaker, she is also dealing with the implications of her own baggage, her past, and how it has seemingly comeback to haunt her.

The Bottom Line: The Second Chance Hotel isn’t just April’s story of love and redemption, but also a story of love and redemption for Martha, Cillian, and Cillian’s daughter.  All their lives have been turned upside down and Shady Pines feels like their last hope.  As the four learn to trust one another, they also learn to like and even love one another.  While there are plenty of obstacles to their various HEAs, there is still an HEA for each.  While I can’t say this is an overly emotional read, it does have loads of feels and it is a nice mix of the past and the present which I am always a fan of.  The setting is also lovely and evolves as the characters evolve.  In all, this is a sweet read that will most certainly appeal to romance readers.