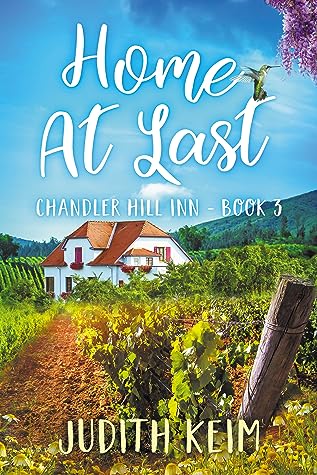 Louise “Lulu” Kingsley is thrilled to discover after years of wishing for a sibling, Cami Chandler is her half-sister. When Cami invites her to live with her at Chandler Hill, Lulu jumps at the chance to leave behind all the heartache in her recent life. Not the spoiled little rich girl the media would like everyone to think, Lulu digs into marketing for the inn and winery, feeling more comfortable there than she ever did in California with her political father. Better yet, her mother is becoming a stronger, happier person and shares the idea of becoming part of a new family. Even though Lulu is aware that Miguel Lopez is the kind of guy who represents everything she’s trying to forget, she’s attracted to him. Following a heartbreaking situation, she steps away from their relationship. Lulu settles in at Chandler Hill, coping the best way she knows—by working hard. But when Cami’s beloved grandfather, Rafe, has a stroke, Lulu realizes life is short and knows she must make things right with Miguel, and learns that home is where your heart leads you.

At the end of book two of the Chandler Hill Inn series, we were introduced to Louise “Lulu” Kingsley, daughter to a depressed and submissive mother and a now dead, but formerly controlling, carousing, politician of a father.  Needless to say, the death of her father and the subsequent revelations regarding his behavior have rocked Lulu to her very core and she has to find a way back to some semblance of a normal life.

For Lulu, a normal life has always been in the spotlight.  As the daughter of a prominent politician, Lulu has become used to the scrutiny, the photos, the headlines.  Unfortunately, since the death of her father and the revelation of many, many of his darker secrets, Lulu has come to realize, the spotlight is nowhere near where she wants to live her life.  One of her father’s greatest secrets is the existence of Cami Chandler, his illegitimate daughter and Lulu’s half-sister.  Though Lulu initially wanted to hate Cami and all she represents regarding their father, Lulu has come to like Cami and love the life she has at Chandler Hill.  In the months since her father’s death, Chandler Hill has become something of a refuge for Lulu.  With her background, she is able to help out at the Inn and loves the feeling of acceptance she feels from everyone around her.

Though Lulu never intended to stay at Chandler Hill, the life she could have there looks better and better as the days pass.  Lulu’s greatest concern is her mother, whose life has been less than stellar thanks to her father.  In the wake of her father’s death, Lulu expected her mother to become worse, but with the help of her long-time friend and caretaker and her doctor, Lulu’s mother begins to make great strides.  As a part of her recovery, Lulu’s mother visits Chandler Hill and faces Cami and the consequences of her late husband’s deceit.  As is wont to happen, Chandler Hill works its magic and Lulu’s mother falls in love with the location.  What’s more, Lulu finally begins to see her mother for who she really is, under all the years of neglect and mistreatment.

Though Lulu sees her life at Chandler Hill as being perfect, there are still several obstacles she has to overcome.  Some are related to her present and future, and others are related to her past.  Breaking away from her past life comes with challenges and Lulu begins to understand that some people simply have to be left behind in order to move forward.  As hard as it seems, Lulu meets every challenge and every obstacle with the help and support of both her old and new family.  Building her new life is heartbreaking, beautiful, difficult, and completely worth it in the end.

The Bottom Line:  What an emotional and wonderful story this was to round out the Chandler Hill Inn trilogy.  Like all the other women in the family, Lulu has an uphill battle ahead of her, but with the strength of those around her and the ones who came before, she is able to adapt and overcome all her obstacles.  This was such a fitting end to what I assume (though I don’t KNOW) is the end of this series. From start to finish, the Chandler Hill Inn series is a family saga that covers all imaginable circumstances, situations, and emotions.  The series is filled with likeable and endearing characters that face real life challenges and deal with those challenges in real ways.  I found so many of the characters to be very real and relatable, which always going to be a plus for me.  When you add in the beautiful setting that evolves just as the characters do, you certainly have a recipe for success.  Finally, this last book has a lovely epilogue that really brought everything full circle and for that, I was especially grateful.  A well-worth-reading trilogy!