Review: Better Choices by Rod Pennington and Jeffery A. Martin

Posted on July 9, 2020 by rolopolobookblog 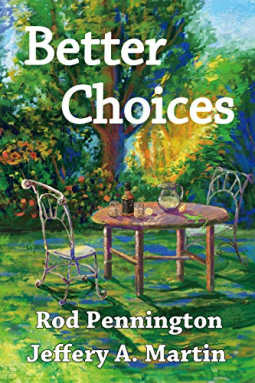 Allison Clark has made many bad choices. Now, on the cusp of a divorce, she finds herself sandwiched between caring for her often difficult and dying mother and dealing with her rebellious teenaged twins.

When she thinks life couldn’t get any more complicated, Allison discovers her mother has concealed an ominous secret from her for her entire life.

At her twins’ eighteenth birthday party, and nearing the end, her mother checks off the last item on her bucket list and reveals the long-hidden family secret. Allison’s world is immediately turned upside down and the revelation stuns family and friends alike.

Allison Clark previously believed she had her life and her sh*t together.  Now, facing a divorce, the eighteenth birthday of her secretive twins, and a mother ready to drop bombshells now that her husband is dead, Allison isn’t at all sure about anything. In fact, Allison is on the verge of facing up to her bad choices and making significant changes in her life.

Like many parents, Allison is having a hard time seeing her twins as near-adults.  Though her divorce is relatively amicable, Allison believes her twins know nothing about it; of course, her twins know all about the divorce and are on board with her decision.  What’s more, in recent months, the twins have been secretive about their movements and activities.  Though they have been careful, the jig is up when the high school calls Allison to report them absent without cause.  When Allison tracks down the twins, she is blown away by what she discovers, and it takes everything in her and a stern talking to from her best friend (and lawyer!) not to lose her mind.

Up next on the agenda, Allison’s mother is in critical condition and the writing is on the wall with regards to the end of her life.  As is typical, Allison’s mother has no interest in going quietly into the night and fully intends to live out her remaining days in any damn way she sees fit.  To accommodate her mother, Allison, her aunt, and her aunt’s life partner all move in and then the fun really begins.  Allison’s aunt’s life partner suffers from Alzheimer’s though she still has many wonderfully lucid hours each day.  Between the bouts of memory loss, Allison’s coming to grips with the figurative loss of her twins, and the actual loss of her mother, Allison isn’t certain she can handle much more.

The Universe cares not for your emotional state.

On top of everything else, Allison’s ex is throwing a hissy fit about finances which forces the hand of Allison’s mother.  When Allison’s mother finally spills the beans, the entire family is impacted and so many things from the past begin to fall neatly into place.  With the future of her family radically altered, Allison does everything in her power to keep her sh*t together and not lose her damn mind.

The Bottom Line:  Yet again, I find myself befuddled by the Goodreads star rating for a book!  I found this book to be refreshingly light and rather wonderful despite all the crazy that occurs.  In fact, it is all that crazy that occurs that makes this such an interesting and completely entertaining read.  To get through the madness, Allison has to change her mindset and that opens up a whole new world for her.  Her relationship with her mother and her twins greatly improves, she learns to be more open and accepting of life and its possibilities, and she finally finds her own voice and begins to use it, forcefully.  There isn’t a character in this book I didn’t like, to one degree or another, and I found the blending of the sometimes wildly different personalities to be well-written and beautifully combined.  In all, I found Better Choices to be an excellent read with a whirlwind of scenes, secrets, and clever maneuvering.  This was a one-sitting and highly recommended read for me!