Posted on July 8, 2020 by rolopolobookblog 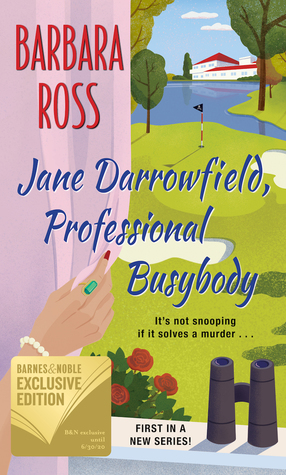 Jane Darrowfield is a year into her retirement, and she’s already traveled and planted a garden. She’s organized her photos, her recipes, and her spices. The statistics suggest she has at least a few more decades ahead of her, so she better find something to do . . .

After Jane helps a friend with a sticky personal problem, word starts to spread around her bridge club—and then around all of West Cambridge, Massachusetts—that she’s the go-to person for situations that need discreet fixing. Soon she has her first paid assignment—the director of a 55-and-over condo community needs her to de-escalate hostilities among the residents. As Jane discovers after moving in for her undercover assignment, the mature set can be as immature as any high schoolers, and war is breaking out between cliques.

Jane Darrowfield has a gift, or maybe it’s a curse, perspective matters!  If you need someone to know the unvarnished, cold, hard truth, ask Jane.  Jane doesn’t shy away from the truth and no matter how awkward the situation, Jane faces it head-on and without fear.  Make no mistake, Jane isn’t cruel or unkind, she’s just brutally honest and her friends have come to appreciate and rely on Jane for her skills.

With many years of retirement looming, Jane has recently discovered that her skills can be useful on a wider scale.  Though she’s never considered herself to be a professional busybody, an opportunity has presented itself that will allow Jane to put both her sleuthing and unvarnished truth skills to the test.  The administrator of a local senior living village has contacted Jane about a “little” problem he needs her particular kind of help with.  It seems the seniors have formed cliques and there is unrest in the village.  Jane’s job will be to suss out the problem and advise the administrator on his best course of action for all involved.

So as not to blow her cover, Jane temporarily moves into the village under the guise of a prospective buyer.  It doesn’t Jane long to see the clear divide among the seniors and what needs to be done.  The biker gang needs to start sharing the game room and the cool kids need to start sharing the gold course.  As Jane reports her findings, she expects to move back home and be done with the whole dumb mess, but before she can pack her bags, the local lothario is found dead on the golf course and Jane is asked to stay on.

Murder is so far out of Jane’s depth, but busybidying isn’t and she determines to stay on as asked and find the killer.  What harm can asking a few questions do, right?  As it turns out, most people don’t care for pointed and/or seemingly prying questions because most people have something in their past, they aren’t all that proud of revealing.  Jane is nothing if not persistent and as she continues to poke and prod, people begin to open up to her.  What Jane discovers is far beyond her wildest imaginings and far more dangerous than she ever could have anticipated.  Her new beau wants her to drop the whole thing and move home, but Jane isn’t about to be benched when she is so close to undercovering the truth.

The Bottom Line:  What a fun ride this first-in-a-series book turned out to be!  Jane is plucky and bright and more than willing to help correct a situation.  Her forthright nature makes her perfect for professional busybodying and though the process can be painful, it is also useful and honest.  Jane doesn’t see any reason for subterfuge or dishonesty and though some don’t always appreciate her efforts they are generally grateful for them, in the end.  By the time Jane is done with the senior village, she’s seen two unexpected couples ride off into the sunset, two large cliques broken up, big secrets revealed, and murder solved.  Not too shabby for a professional busybody 😊