Review: Happily Whatever After by Stewart Lewis 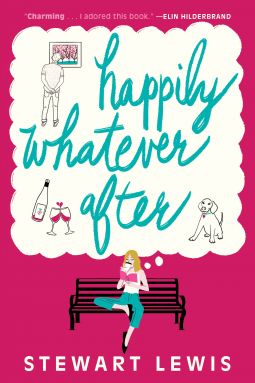 Thirtysomething Page was content with her life in New York City—until it went to the dogs. Unceremoniously dumped by her boyfriend of four years and fired from her art gallery job in the same week, she flees to Washington, DC, and moves in with her big brother. She hopes the new setting and familial comfort will help her finally find her bearings. What Page finds instead is an unlikely refuge: a park for the neighborhood’s poshest pooches, and a quirky pack of companionable dog-run regulars who become fast friends.

Both four-legged and two-, these new allies offer Page a world of possibilities. The woman who hit rock bottom now has dreams: of having her own business, getting her own place, and even wilder ones about the ruggedly handsome owner of a vineyard and two equally fetching Bernese mountain dogs.

Unleashed from all that once held her back, Page finds everything might be falling into place. But just when she thinks her life is headed in the right direction, the road takes a sharp turn to show her just how unpredictable second chances can be. Will Page get her happily ever after? Is there even such a thing?

Sometimes in life, the worst things that happen to you are just the gateway to the good things that are waiting on you.  Page was pretty sure her life in New York was just what she wanted, a long-term boyfriend, a job in a gallery she loved, and contentment.  And then, it all fell apart in a single week.  Her boss called her boring and her boyfriend dumped her.  With no job, no boyfriend, and no home, Page has no choice but to seek refuge with her brother.

Washington DC is Page’s new home and while she loves spending time with her wildly successful brother, she has no idea how she is going to become equally successful in her own life.  With no prospects for a job, let alone a career, Page begins to spend a portion of her days at the local dog park.  It doesn’t take long for the regulars to figure out, Page is the only one in attendance with no dog, which, of course causes get speculation.  Within a matter of just a few visits, Page has nicknames for all the owners a new friend in the form of a young, attractive man who is attached to a wealthy, older dog owner.  Page immediately becomes friends with both men and suddenly her world in DC has opened significantly.

Over the next weeks, Page opens herself up to all sorts of new people, possibilities, and events.  She is wowed by some of the people she meets, impressed by others, and baffled by more than a few.  Throughout these experiences and events, Page begins to formulate an idea in the back of her mind, what would it be like to open and own her own gallery?  Among her new friends, Page has met people who can help pave the way for her dreams, but it will take a load of hard work and effort.

As Page goes about aimlessly living her new life, she begins to notice changes in her brother and his life.  His patterns seem to be disrupted, she’s certain he’s having an affair, and he just doesn’t seem his usual cheerful, happy go lucky self.  Though he swears all is well, Page isn’t certain, but until he comes clean there’s nothing she can do but live her life and worry.  Living her life is exactly what she does and along the way, Page discovers exactly what her path is all while helping her new friends and family alike.  The path isn’t smooth, but it does lead Page to exactly where she was always meant to be.

The Bottom Line: This is yet another read whose Goodreads star rating baffles me.  I found this book to be of full range of goodness from cover to cover.  Though Page initially comes across as flighty and somewhat ditzy, she eventually comes around to the person she truly is, a kind, generous, caring person with a dream that takes all she is to come true.  Ultimately, Page’s story is about how hard it is to be an adult.  Life doesn’t always go as we plan and when we find ourselves adrift, we have to find a new plan and a new path.  Page does that, but not without learning a great many valuable lessons about herself, life, and love.  In all, I found this to be a quite good read and well worth the time and effort.