Review: The Body from the Past (Book #5: Jazzi Zanders Mystery Series) by Judi Lynn

Posted on May 8, 2020 by rolopolobookblog 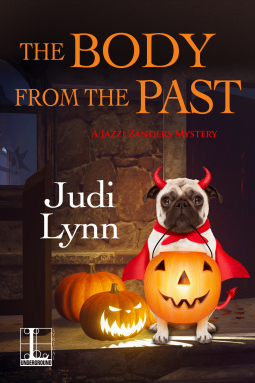 Jazzi, her cousin Jerod, and her husband Ansel are preparing to renovate a charming house that reminds her of an English manor. Before purchasing it, they had inspected the house for structural issues, but now when they do a more thorough walk-through, they discover a teenage girl’s bedroom that clearly hasn’t been touched in years. Dust covers the pink canopy bed, clothes still hang in the closet, and a hope chest remains full of journals and memorabilia. They’ve stumbled on a shrine to a dead girl.

They learn Jessica was killed in the middle of her high school graduation party. The murderer was never identified, but the brother-in-law of Jazzi’s friend, who went to school with Jessica, was suspected and never lived it down. He implores Jazzi to review the cold case and finally prove him innocent. Now it’s up to the house-flipper to nail a killer who will do anything to close the door on the past . . .

Jazzi Zanders has promised everyone, including her sweet husband that she will absolutely, positively stop getting involved in solving murders!  With nothing but good intentions, Jazzi, Ansel, and Jerod make their way towards their latest project, a wonderful English cottagesque home they are flipping for resale.  Though the work is going to be intense and difficult, at least this time, Jazzi hasn’t run across a dead body somewhere in the house.

Unfortunately, Jazzi doesn’t have to literally trip over a dead body to become involved in a case.  When she and Ansel’s good friends call to ask about the new house they’re working on, they also reveal a chilling story that has haunted the small town for years!  Though Ansel doesn’t want Jazzi to become involved, he is also kind and caring and finds it hard to refuse helping their friends. According to their friends, on the night of their graduation party, a young girl, Jessica fell to her death from the second-floor balcony of her own home.  While the town gossips have been vicious in their tongue-wagging, the police have never been able to close the case.

With the case having been cold for so many years and out of her detective friend’s jurisdiction, Jazzi isn’t sure what she’s going to be able to discover that the police haven’t.  Like Ansel, Jazzi is kind and wants to see her friend’s suffering end.  With the help of the young girl’s diaries, Jazzi is able to piece together the story of a bright, outgoing young girl who was constantly hounded and belittled by her father.  Her brother was seemingly quite protective of her and her mother often tried to defend her daughter, but Jessica’s home life wasn’t great, and she was looking forward to leaving home after graduation.

Each diary entry gives Jazzi more insight and the name of another person she needs to speak with.  Thankfully, Jessica had a core group of friends loyal to her and willing to do anything to help bring justice to their friend.  Jessica’s friends help Jazzi understand more about Jessica’s life and, most importantly, the night their friend plunged to her death.  As always, not every encounter is pleasant and Jazzi quickly discovers a few truly horrible humans who care nothing for the loss of Jessica or what her loss has done to others.  Marking suspects off the list is proving harder than expected considering the coldness of the case.  That is, until fresh bodies start dropping!

The Bottom Line:  I didn’t quite love this Jazzi book as much as the previous four, BUT I did very much appreciate the novel approach taken in this book.  It isn’t often that Jazzi doesn’t have a fresh body and crime scene to deal with and while I liked the novelty of it this time, I sure hope it doesn’t become a standard part of this series.  With that bit out of the way, I was, once again happy with the other aspects of this book.  Jazzi and Ansel’s circle is widening with every book and it really does enhance to spirit of friendship and community that has been a part of the entire series.  Of course, there is also loads of good food, dialogue, and evolution among all the characters, old and new alike.  I find these books to be solid, well-crafted reads that are populated with people I like to revisit regularly.  For my money, that’s exactly the kind of book I want to continue reading.

← Mini-Review: The Woman In the Painting by Kerry Postle
Excerpt and Sweepstakes: Working For It (A Cook Brothers Series) by BJ Harvey →