Posted on April 20, 2020 by rolopolobookblog 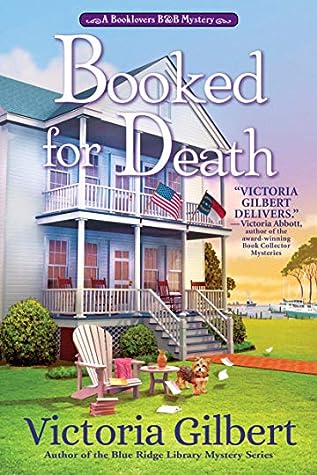 A book lover’s B&B in an idyllic waterfront village becomes the scene of a grisly murder–and a ruthless battle between treachery and the truth.

Nestled in the historic waterfront town of Beaufort, North Carolina, Chapters Bed-and-Breakfast is a reader’s paradise. Built in 1770, the newly renovated inn hosts a roster of special events celebrating books, genres, and authors. It’s the perfect literary retreat–until a rare book dealer turns up dead in the carriage house during a celebration of Golden Age mystery author Josephine Tey.

The victim’s daughter points the finger at forty-two-year-old widow and former schoolteacher Charlotte Reed, who inherited the B&B from her great-aunt Isabella. Charlotte is shocked to discover that the book dealer suspected Isabella of being a thief who founded Chapters on her ill-gotten gains. Charlotte has successfully learned the B&B business in a year, but nothing has prepared her to handle a death on the premises.

Armed with intelligence and courage and assisted by her vibrant older neighbor, a visiting author, and members of a local book club, Charlotte is determined to prove her innocence and to clear her great-aunt’s name. But the murderer is still at large, and equally determined to silence anyone who might discover the truth behind the book dealer’s death. Now, Charlotte must outwit an unknown killer–or end up writing her own final chapter.

The Bottom Line:  Though I enjoyed this read, overall, I am reluctant to move above a three-star rating.  I see a load of potential in the series, but this first book seems to have fallen into several first-in-a-series pitfalls.  A first book in a new series has a load of ground to cover and if it isn’t handled properly, the book becomes bogged down and less enjoyable.  Because of the nature of the setting, which I adore, by the way, there are a great number of characters to sort through.  In addition to the book-specific characters, there are also the regulars whose stories we are just beginning to learn.  Wading through all the names and backstories can become tedious and it sometimes did.  Additionally, there is a plot within a plot and one, the backstory plot related to Charlotte and the B&B, has a tendency to overwhelm the book-specific plot.  As I said, there is a great deal going on in this book and, for my money, some of it related to Charlotte and her mysterious great-aunt could have been left to later installments of the series.  With all that having been said, I am not giving up on this series.  I greatly enjoyed the setting, both the B&B and the town, I like Charlotte and her spry next-door neighbor, and the possibility and potential these things hold moving forward.  I certainly wouldn’t advise skipping this book, but this is a densely packed genre, and you may find some of the issues I found in this book to be more trouble than they’re worth, especially when you consider the aforementioned densely packed nature of this genre.