Posted on April 10, 2020 by rolopolobookblog 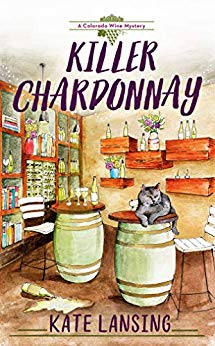 Parker Valentine has always dreamed of opening her own winery in her hometown of Boulder, Colorado. But she gets more than she bargained for when a food and wine critic unexpectedly shows up at Vino Valentine on opening day. A negative review could be fatal for her business, and not only does he seem to hate her chardonnay, he also collapses and dies shortly after drinking it.

Although Parker hoped that the attendees would put a cork in it, soon her winery is at the center of a social media firestorm. With #killerchardonnay trending online, Parker’s business is in danger of closing, and she has no choice but to investigate the murder herself.

To restore her reputation, catch a killer, and keep her struggling business open, Parker needs only one thing: some good proof.

Nothing will kill a brand-new business like a scandal on opening day!  Parker Valentine has poured every ounce of everything into her new Boulder-based winery and though she is looking forward to finally being open, she’s also tremendously nervous.  As it turns, her nerves aren’t unfounded.  Shortly after opening, a rather stylish couple break out into a fight and a man is found dead in the bathroom.  Before her business is even allowed to crawl, Parker’s winery is already on its last leg.

As if the fight and the dead we’re bad enough, the dead man was also a notorious food critic whose left-behind notes seem to implicate Parker as his killer.  In no time flat, social media has picked up on the story and in the blink of an eye, Parker’s winery is trending, and not in the good way.  If her business is going to have any chance of survival, Parker has got to figure out who killed the critic and why.  Though the police have warned her to stay out of the investigation, Parker has never been one to sit still and do nothing and what harm can asking a few questions really cause?

In the course of her investigation, Parker discovers all kinds of dirty little secrets and players in an elaborate game.  She also discovers a delectable local chef who is intent on having Parker’s wine in his new restaurant and helping her solve the mystery of the dead critic.  He’s handsome, smooth, and one of her brother’s good friends which makes him virtually off limits.  Trouble is, he’s also kind and willing to help Parker which makes him an ally in what becomes a very dangerous investigation.

The Bottom Line:  I’m not particularly a wine drinker but I sure do love books about wine and wineries!  Parker’s winery is set in an ideal and beautiful location to be utterly successful but her first day bad luck nearly topples her efforts before she even has a chance to get started.  The investigation she embarks on is dangerous, twisty, and turny, and just right for the cozy mystery genre.  There are a suitable number of minor characters who are interesting and will provide loads of entertainment as the series begins to unfold.  I have a great deal of hope for this series after this promising beginning.