Posted on March 30, 2020 by rolopolobookblog 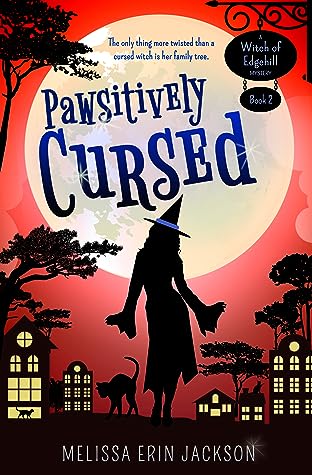 The only thing more twisted than a cursed witch is her family tree.

For the past fourteen years, Edgehill’s resident secret witch, Amber Blackwood, has been haunted by her parents’ deaths. The whole town knows about the tragedy, but the details remain a mystery even to Amber. From her tiny studio apartment above her shop, The Quirky Whisker, Amber can see her partially rebuilt old house out on the edge of town. Although she now has a good life—delighting children with her magically infused toys, concocting healing tinctures for Edgehill’s residents, doting on her cats, Tom and Alley, and sitting on the committee for the town’s annual Here and Meow Festival—she feels stuck in the past.

Amber suspects the fire that killed her parents was set deliberately by a witch from the cursed Penhallow clan, from whom no one has heard even a whisper since the night her parents died. The clan’s sudden disappearance is no coincidence to Amber, but her aunt Gretchen refuses to believe there’s a connection and urges Amber to stop looking for someone to blame. So Amber is shocked when Aunt Gretchen shows up unexpectedly, claiming the Penhallows have resurfaced and that one of them is heading for Edgehill with Amber in his sights.

Aunt Gretchen knows more about the fabled clan than she’s letting on. Amber is determined to find out what her aunt is hiding, and what the Penhallow seeks, before the same treacherous force that took Amber’s parents’ lives claims her own.

At the end of my review for the first book in this series, I noted that if it were to survive and be successful there needed to be evolution.  I got exactly what I asked for and I got it in spades!

Amber Blackwood has always suspected her parents weren’t victims of an accidental fire, but something far more nefarious.  Though she has asked her beloved aunt Gretchen many, many times about the night her parents died, she has never gotten any satisfactory answers.  Though Amber has never really given up on her quest for answers, it doesn’t consume her.  Until now . . . when Amber’s aunt and her sister both show up in her shop unexpectedly, Amber knows it can’t be good.

Though Amber is thrilled to see both her aunt and her sister, they come with bad tidings.  If Amber’s aunt is correct, Amber is in grave danger and the threat is coming from an old and very dangerous source.  According to the legends, the Penhallow family began stealing magic from other witches and when they were caught and punished, their magic became twisted and evil.  In the decades since their punishment, the Penhallows have become the boogeymen of the witch world and to have one after you is the ultimate danger, a danger that is beyond difficult to fight.

To make matters far, far worse Amber has no idea what the Penhallow’s may want from her and that is in large part because she doesn’t know the full story of her family’s demise.  With no choice but to open up and tell the truth, Amber’s aunt begins to tell her all she knows.  With each new revelation, Amber begins to understand what it is the Penhallows want from her, but she has no idea how to satisfy their desires and keep herself alive.  What is certain, if Amber is going to stay alive, she’s going to need help and a lot of it.  As if the universe knows exactly how desperate she is and the danger she is facing, Amber’s magic begins to respond and expand.  The only problem, she isn’t used to the new power is trying to learn to control it while trying to protect herself.

Along with her aunt and her sister, Amber also has her reluctant and reclusive cousin, and, of late, the sheriff who now knows her secret.  As the danger becomes ever more real, Amber and her crew come together with all they’ve got to fight off an evil so dangerous it is a threat to the entire town.

The Bottom Line: I hoped this series would evolve and it certainly did in the installment!  One of my favorite things in series reading is the book that contains all the backstory, and this is exactly what I got in this book.  There is so much back story here and it all contributes to the plot which makes everything all the more exciting, interesting, and entertaining.  Not only does Amber and her magic evolve, but her surly cousin becomes a real player in the game, and the sheriff is now an ally.  I am quite excited by the jump in complexity in this series and glad to see that the characters, the plot, and the community is growing.