Posted on March 19, 2020 by rolopolobookblog 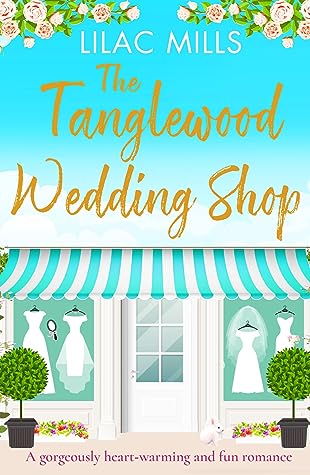 Edie has enough on her plate keeping her tyrannical boss happy at Moira’s Wedding Shop. So when society bride Tia begs Edie to design her wedding dress – and keep it a secret from the domineering mother-in-law to be – Edie reluctantly says ‘I will’ to making Tia’s dream come true. If her deception is found out, though, it would mean losing her job…

Meanwhile best man James has his eye on Edie and he’s proving ever harder for her to resist. James is upper-crust and Edie’s one unexpected bill away from the breadline – they’re from completely different worlds and there’s no way it can ever work between them … right?

I knew that second book was just a blip on the radar and not the start of downward trend!!  I. Knew. It.  Book three of the Tanglewood Village series is every bit as good as the first book with fantastic characters, a lovely story, and a setting that is just to die for.

Edie has devoted her life to two things, her young son and her work.  Edie’s work is like oxygen, she needs it to survive, but the shop she works in is killing her spirit.  Edie is a topnotch designer and seamstress who specializes in one-of-a-kind wedding dresses that are not only beautiful but elegant and perfectly designed for the bride, her body, and her personality.  Edie is a magician with needles, thread, and fabric, but her boss never allows her to shine.  In fact, Edie is so demoralized she rarely ever speaks in her boss’s presence, never contradicts her, never takes credit for her own work, and lives in fear of losing her job.

Since her accident, Tia has had to learn to adjust to life a bit lower to the ground.  She may be wheelchair-bound but that certainly hasn’t dampened her personality.  With her wedding coming up, Tia has had to learn the fine art of not speaking her mind.  Her mother-in-law is quite big for her britches and has very distinct ideas about the way her son’s wedding should look and play out.  While Tia doesn’t care about most of the details, her dress is one thing her MIL will not have a say in, at least as far as her MIL believes.

On the day of Tia’s wedding dress consultation, all goes exactly as Tia’s MIL and Edie’s boss expect; between the two of them, they run roughshod over Tia and Edie and all is right with the world.  To Edie’s surprise, it isn’t a week later when she is secretly approached by Tia’s spy, James to make Tia the dress she actually wants.  In secret, of course.  Though Edie is deservedly worried about losing her job, she is more concerned with Tia not having the dress she wants and thus begins the project that will change a lot of lives.

As the weeks leading up to the wedding go by, Edie and her son become totally smitten with James and Tia.  Edie admires Tia’s gumption and her willingness to take all the blame should things go wrong.  She and her son adore James for very different though equally good reasons.  Their time together may be limited, but it is always uniquely spent, fun, and all-inclusive.  Edie adores James’ willingness to accept her son and include him and his willingness to help a friend (Tia) in need.  Unfortunately, as the saying goes, all good things must come to an end, and when they do, it is a spectacular end.

The Bottom Line:  Oh, boy!  What a story this was, and I enjoyed every single word!  Edie, James, Mary the bunny, and Tia were all fantastic characters that just wrapped me around their respective fingers and paws.  There were moments of hilarity, moments of pure joy, moments of profound sadness, and straight up shenanigans.  There was also, Betty and y’all know how I feel about her 😊  More than all of that, I loved how much Edie changed and evolved.  She went from a scared young woman to a confident and happy woman and that was so lovely to see.  I also very much loved the descriptions of the gowns she designed and made.  While I know nothing of fashion and haute couture, I know what Edie was designing was top of the line.  In all, I found this book to be utterly wonderful and I sure hope the small village of Tanglewood has a few more shops with single ladies!