Posted on February 26, 2020 by rolopolobookblog 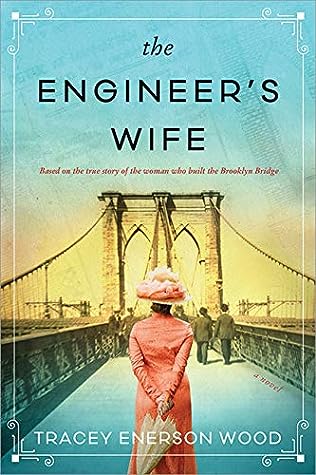 When Emily Warren Roebling marries Captain Washington ‘Wash’ Roebling-the handsome, charming soldier of her dreams, and her brother’s dear friend and aide during the Civil War-a lifetime of family fun and happiness seems within her grasp. But then Wash accepts the position as Chief Engineer on his father’s magnum opus, the Brooklyn Bridge, and it changes both of their lives forever. In Brooklyn, the happy home they’d dreamed of warps around the bridge. Incapacitated from working in the high-pressure tanks at the bridge’s foundations, Wash convinces Emily to be his messenger to the site. Little by little, Emily finds herself taking over the project-with no formal training or education in math and science. Emily throws herself into building the bridge but faces suspicion and disparagement at every turn as she supervises dangerous construction sites and argues for the safety of the bridge amongst Manhattan’s male elite. The Engineer’s Wife delivers an emotional portrait of a woman transformed by a project of unfathomable scale, and of a husband and wife determined to build something that lasts–even at the risk of losing each other.

The Bottom Line: For me, this book boiled down to two things: 1) a great deal of whining and 2) some very slow sections that were difficult to get through.  Despite these two things, I stuck with this book to the bitter end and while there are certainly some interesting and even entertaining bits, they just weren’t enough to balance out all the whining and the slow bits.  I wanted to like Emily and have compassion for Wash, but both, with their general attitudes and demeanor made it hard to do so.  I will say, I admire what Emily was able to accomplish: she had to teach herself the math and the principles of engineering in order to complete one of the most iconic projects in all of the US all while fighting the prejudices and laws (literally!) that often hampered her efforts.  At the end of the day, I wanted to like this book so much more than I ultimately did.  This is absolutely a story worth telling, but unfortunately, the presentation of this story isn’t quite up to snuff.