Review: A Highlander in a Pickup (Book #2: Highland, Georgia Series) by Laura Trentham

Posted on January 31, 2020 by rolopolobookblog 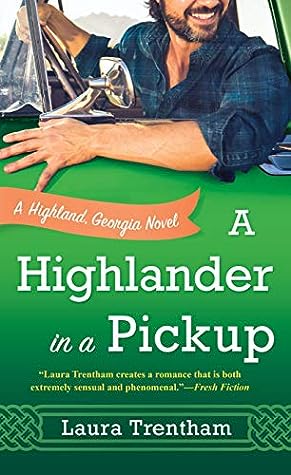 Iain Connors is the poster boy for the strong and silent type. Growing up a loner at Cairndow Castle in Scotland with only the cliffs and moors for company, it’s understood Iain will assume the mantle of Cairndow groundskeeper when his father is ready to relinquish it. But his stint in Her Majesty’s Armed Forces has opened up a whole new world—and now, rather than settle down, he accepts an invitation to travel to the States to take charge of the Highland Games. After all, he’s led men into battle, how hard can planning a party be?

Anna Maitland is ready to step up for her best friend Isabel Blackmoor, who can’t run the Games in their hometown this year. Surely Anna, a dance instructor with boundless energy, spirit, and charm, is up for the challenge? What she doesn’t anticipate is a man in a kilt who turns up claiming he’s the one in charge. What’s worse about this Iain? He’s so infuriatingly handsome that she can’t help but fantasize about him whispering sweet-nothings in her ear in his rumbly, sexy brogue. . .

Anna Maitland has got her hands beyond full.  In the absence of her best friend, Isabel Blackmoor, Anna is in charge of organizing and seeing through the Highland Games.  In addition to that monumental task, Anna has her dance school to run, classes to teach, an application to run for mayor to fill out and turn in, and a broody Scot to keep at bay.

Anna is determined to accomplish every task, monitor every situation, attend to every detail, and do it all without help!  Relying on others is certainly not Anna’s strong suit and she needs the town to see her as capable, efficient, innovative, and dedicated if she expects the town to back her for mayor.  Iain Connors is just a sexy thorn in her side and all she needs him to do is clean up the animal poop and stay out of her way.  Anna is fine and she doesn’t need help!

Iain Connors is a bit adrift in his life.  The plan has always been the plan, when his father is finally ready to retire as Cairndown Castle’s groundskeeper, Iain will slide into his position and work the land as his father always has.  Yes, that’s always been the plan, but now, just as the moment is upon him, Iain isn’t entirely sure that’s what he wants out of life. When the opportunity to travel to Highland, Georgia arises, Iain jumps at the chance to spread his wings and see what the world across the big pond has to offer.

Highland, Georgia isn’t at all what Iain expected.  He’s been dispatched to help Anna Maitland with the Highland Games and while he is ready and willing to help, the feisty dancer has other plans.  All Anna wants Iain to do is scoop the poop and stay out her way!  Though Iain is generally respectful of other’s wishes, he can see quite clearly see that Anna is struggling to carry the load alone.  If he can’t help in an obvious way, Iain has every intention of helping in smaller, less obvious ways.  First on the list, scoop the poop 😊

While Anna thinks she’s got the Scot out of her way, she quickly realizes he’s actually working in the background.  With every visit to the Games site and office, Anna sees some new thing that’s been completed and can be marked off her to-do list.  Though Anna doesn’t want to be indebted to the gorgeous Scot, even she has to admit his help has been invaluable.  Sharing the burden isn’t something Anna is used to, but Iain’s style isn’t to bulldoze over her, but to quietly support her, help where he can, and not demand some sort of recognition or compensation for his efforts.  In fact, Iain is just about the perfect man.  Too bad Anna isn’t in the market for a man . . . . she’s already got enough on her plate.

The Bottom Line:  This series is, even at only two books in, shaping up to become one of my favorites!  From the setting to the plot to the characters, I am so enjoying this world.  Though I sometimes struggle with characters too stubborn for their own good, I did not with Anna because she is a total package and her stubbornness is only one part of her formidable personality.  Letting Iain in isn’t easy for Anna, but the more she gets to know him the more she respects and admires him and the way he seems to make her better without squelching any of her own dreams or ambitions.  Iain is just delightful on every level, but my favorite quality is his extreme awkwardness around Anna.  Iain is competent, capable, assertive, and totally awkward and that made him a wonderfully endearing character.  As he and Anna make their way toward one another, he gains confidence with her and shows her how he can undoubtedly be the man she needs.  As with the first book, this one has a bit of everything including some humor, some naughty bits, some of the feels, and just a very good story.