Posted on January 21, 2020 by rolopolobookblog 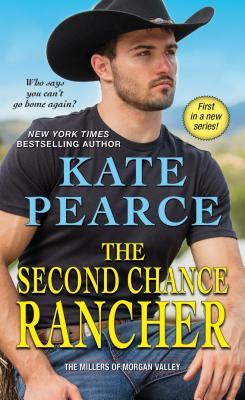 There’s a reason Jackson Lymond left the Air Force, but he’s not telling a soul. He’d rather keep things simple, while trying to start a new life helping his older brother on their northern California ranch. At least Morgantown’s flirty local bartender can keep his mind off the past–that is, until he runs into Daisy Miller . . .

Daisy doesn’t really expect Jackson to remember her. Back in school she did her best to blend in–and pretend she didn’t have five brothers who’d hogtie any boy who even looked at her. These days though, she and Jackson might have more in common than just their ranching relatives. After all, they both left home only to return. Trouble is, under the watch of her fiercely protective family, Daisy is longing for some privacy. Letting Jackson into her life could make that even more difficult–or it might be the second chance they’re both looking for . . .

Since leaving the Air Force, Jackson Lymond just hasn’t been able to settle into his own skin.  He thought he would retire from the Air Force, but his plans changed he left early, and now he’s back home on a ranch he doesn’t own working with his older brother and trying to find his next path in life.

Jackson is no stranger to hard work and that’s a damn good thing since his recently deceased father left the family farm in quite a state.  The buildings are falling apart, the fields are a mess, and there is little to no livestock to be found.  If it weren’t for the solid investment by his older (and very wealthy!) brother and the extra work offered by the neighboring Morgan family, the Lymond ranch would be nothing but a total loss.  With nothing but time on his hands, Jackson jumps into the work and hopes some clarity will come with the long days.

Daisy Miller is running herself ragged; with two full-time jobs and a whopper of a secret, she’s about as worn out as a girl can get.  In the life everyone knows about, Daisy is the proprietor of the local flower shop and in the life no one knows about, Daisy works with her Silicon Valley contacts on a project that nearly destroyed her several years ago.  When Daisy returned home broken and defeated, she promised her family she would never go back to the madness that nearly destroyed her.  Unfortunately, some projects are to near and dear to give up and Daisy has secretly been working with her old group to finish their once very promising work.  With so much on her plate and so much she can’t reveal to anyone, Daisy has little enough time for herself, let alone a boyfriend.

But, what about a hot rancher with no strings attached????

Daisy’s ultimate plan with Jackson Lymond is to have her fun with him and be done, to hit it and quit.  She has no use for a boyfriend – the last one ended very badly – and with no strings attached, no one can possibly get hurt.  To Daisy’s credit, she is honest with Jackson from the beginning, but he is also honest with her.  Jackson likes Daisy and just wants a fair shot with her at a real relationship.  Make no mistake, the sex is fantastic, but Jackson is at a place in his life where it’s time to consider the future and exactly who he wants to spend that future with.  Daisy is everything he wants in a partner, including stubborn as can be and somewhat difficult.  Convincing Daisy to spend her life with him isn’t going to be easy, but Jackson has fought harder fights in his life, and none have had a prize as great as Daisy Miller.

The Bottom Line:  Before this book, I would have had to look long and hard through my reviews for a Kate Pearce book I didn’t simply adore and totally gush about in my review.  I struggled with this book for one reason and one reason alone, Daisy Miller!  While I wanted to like Daisy and understand her situation – past and present – I couldn’t get past her bad attitude and overall mean spirit.  On top of simply being mean to Jackson – and I do mean, mean not just brutally honest! – she often sent terrible mixed signals.  Daisy is aware from the beginning of Jackson’s feelings and intentions and because she can’t drum up the will and courage to sort out her own life and mess, she takes it out on Jackson.  With the negative out of the way, let’s look at the positives: Jackson and Morgan Valley.  Jackson is a dream of a man and I so appreciated his character, especially is awkwardness which I found quite endearing.  It’s also so lovely to be back in Morgan Valley and seeing this idyllic location being used to expand the series into this spin off.  I have every confidence this series is going to be, overall, just as fine as its parent and I look forward to the future of the Miller’s of Morgan Valley.

← Review: Photos of You by Tammy Robinson
Review: The Rancher’s Redemption (Book #2: The Millers of Morgan Valley Series) by Kate Pearce →