Posted on January 17, 2020 by rolopolobookblog 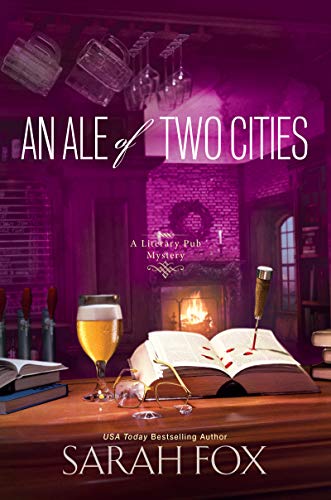 But holiday cheer can’t compete with former resident and renowned chef Freddy Mancini, who arrives with his nose in the air, showing off his ice-sculpting skills like a modern-day Michelangelo. During the artists’ break in the night-long contest, Mel’s tools disappear . . . and Freddy is found dead with her missing pick in his chest.

Although the police turn their attention to Mel, it seems everyone in town had a grudge against Freddy, including his assistant, his mentor, his former flame, and even his half-brother.

Faster than she can fling a Huckleberry Gin, Sadie finds herself racing to make sure the police don’t arrest the wrong suspect—all while sharing a flirtation with local brewery owner Grayson Blake. Their chemistry leads to a heated rivalry at the hockey rink—and to the hot pursuit of a killer.

I knew the second I started this book, I was going to like it, and I did!  In fact, this was a one sitting read for me and I regret nothing 😊

Shady Creek, Vermont has its winter spirit on and is celebrating with one of the town’s most beloved events, the Winter Carnival.  The weather is cooperating, and the town is excited to host a variety of events for locals and tourists alike.  The most anticipated event of the carnival is undoubtedly the ice sculpting competition and one of the Inkwell’s own is favorited to win the event.

Mel Costas is a talented artist and she’s won the ice sculpting competition a handful of times already.  Though she’s favorited among the locals to take the prize, she has stiff competition this year.  Returning home after many years away, the utterly disagreeable and completely unlikeable Freddy Mancini is set to give Mel a run for her money.  No one is happy to see Freddy back in town, not even his family.  Since he left the town to make his way as a chef in Boston, Freddy has developed a large ego, a bad attitude, and tendency to run off at the mouth without a care in the world for other’s feelings.  Clearly, as his competition, Mel is on his radar and he makes so secret of the fact he thoroughly dislikes her and finds her, and everyone else in Shady Creek to be beneath him.

Not surprisingly, Freddy Mancini ends up dead!  While no one is mourning the loss of the colossal jerk, his untimely demise has caused quite a stir.  Mel’s ice pick is the murder weapon and while she seems like a good candidate for having done the deed, she certainly isn’t the only one in town with cause to whack the jerk.  As both and employee of the Inkwell and Sadies’s friend, Mel has help from a lot of people.  Sadie is bound and determined to prove Mel’s innocence, but it is going to take a lot a talking, even more questions, and a ton of patience to wade through the long list of possible suspects.  Seriously, no one liked Freddy Mancini 😊

Interestingly, Sadie finds that her quest to clear her friend’s name overlaps with the interests of the utterly enticing yet totally frustrating Grayson Blake.  As the owner of a small yet killer brewery, Grayson and his business were slated to appear on a national television show right up until the news of the murder broke.  With a vested interest in solving the crime, and perhaps getting to know Sadie a bit better, Grayson steps in to help Sadie which leads to some interesting backstory about Grayson and the discovery of a second body.  Just as things seem to be getting worse, Sadie pulls it altogether helping her friend and Grayson all while exposing a killer.

The Bottom Line:  I am absolutely in love with this cozy mystery series!!  From the setting to the characters to the plot, I enjoyed every minute of this single sitting read.  In the time between books one and two, Sadie has grown and improved the Inkwell, become even more embedded in the community, and truly come to appreciate all that small-town life has to offer.  Outside of the odd murder, Sadie has embraced her new life and Shady Creek has certainly embraced her.  As with the first book, much of the plot unfolds in Sadie’s delightful literary-themed pub, the Inkwell.  Between serving customers, developing a savory and sweet menu, and hosting events, Sadie is always busy, but never so busy that she can’t help her friends and neighbors.  Mel Costas is Sadie’s friend and through clever detective work and good old-fashioned stubbornness and a refusal to give up, Sadie roots out the killer and saves the day.  As she does so, Sadie also deepens her burgeoning relationship with Grayson.  Every aspect of this book greatly appealed to me and I was absorbed in the story and the community from page one.  This is what cozy mysteries are meant to be and I am sincerely hoping 2020 will bring at least one new installment of this series.

← Review: The Love Story of Missy Carmichael by Beth Morrey
Review: Photos of You by Tammy Robinson →