Posted on January 8, 2020 by rolopolobookblog 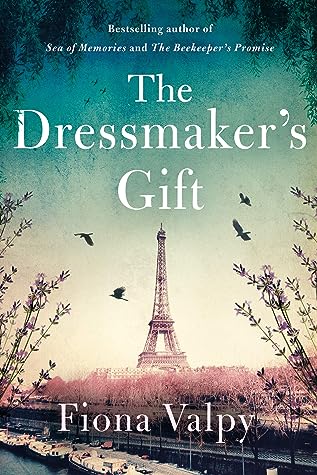 Paris, 1940. With the city occupied by the Nazis, three young seamstresses go about their normal lives as best they can. But all three are hiding secrets. War-scarred Mireille is fighting with the Resistance; Claire has been seduced by a German officer; and Vivienne’s involvement is something she can’t reveal to either of them.

Two generations later, Claire’s English granddaughter Harriet arrives in Paris, rootless and adrift, desperate to find a connection with her past. Living and working in the same building on the Rue Cardinale, she learns the truth about her grandmother – and herself – and unravels a family history that is darker and more painful than she ever imagined.

In wartime, the three seamstresses face impossible choices when their secret activities put them in grave danger. Brought together by loyalty, threatened by betrayal, can they survive history’s darkest era without being torn apart?

It always makes me feel crappy to say I love books about the Nazi regime and World War II, but it is the truth.  I tend to soak up these books and the stories of the people who lived through and triumphed over such misery and depravity.  Fiona Valpy’s The Dressmaker’s Gift is no exception to the rule, and I made through all but the last few chapters in a single sitting.

I am particularly fond of books that shuffle between the past and the present.  There is always some grand truth, some awful secret that is revealed in these types of books and I am quite a sucker for them.  In this case, young Harriet has come to Paris to begin her life’s work in the fashion industry; upon her arrival, Claire discovers she is working and living in the same location her grandmother once lived and worked in many, many years ago.  Harriet’s grandmother, Claire and her two best friends, Mireille and Vivienne, not only live and worked at the same location, but they also undertook secret and tremendously dangerous missions to aid the French Resistance against the onslaught of Hitler and his Nazis’.

For Harriet, her time in Paris isn’t just about beginning her own bright career, but also about connecting with her past and understanding the legacy left to her through the women in her family.  As fate would have it, Harriet’s roommate is the granddaughter of one of Claire’s greatest friends and she (Mireille) is willing to help Harriet piece together the puzzle of the past and Harriet’s own family history.  For Harriet, the adventure has only just begun and what she discovers is a harrowing tale of three women – unsung heroes – who sacrificed everything for the greater good.

From start to finish, I found the chapters related to Claire, her friends, and the war the most interesting.  Each of the three women, Claire, Mireille, and Vivienne were all such bright and wonderful characters, each with their own unique voice and story to tell.  There is a great deal of backstory in this book related to these women and how they each came to be Resistance fighters.  The backstory really brings the women’s lives and sacrifices into focus and helps both the reader and Harriet to understand how each woman came to be who she was.  With each chapter related to the three women and their Resistance efforts, the drama increases and the tension mounts.  Every page is a study in tension and when the dam finally breaks, you are swept up in the devastation and depravity as much as the three friends certainly were.  From the streets of Paris to the concentration camps, three lives unfold to reveal what true passion, compassion, daring, and caring can do when the will and heart are strong.

As Harriet learns more about her grandmother and her friends, the sacrifices they made and the risks they took, Harriet must come to terms with some of her own truths.  For much of her life, Harriet has blamed her inability to truly connect with others on the loss of her mother at an early age and the rather standoffish nature of her father and his new family.  In the face of her grandmother’s story, Harriet resolves to stop blaming others, to deal with her own issues, and live a life worthy of Claire, Mireille, and Vivienne.

The Bottom Line:  As a means of full disclosure, I listened to the Audible version of this book rather than read a physical copy.  I believe I may have had a far better experience with this book on audio than I would have simply reading it myself.  With two narrators – one for Claire and one for Harriet – I was able to more fully connect with the women and their stories.  What’s more, Claire’s narrator in particular is so very skilled at conveying emotion through tone.  I was able to feel the tension, the sadness, the fear through the narrator and it greatly enriched the experience for me.  I found the transitions from one narrator to the next to be flawless and easy to follow which means the transitions from past to present were also flawless.  I preferred the chapters related to the past the most and found the detail and historical accuracy to be spot on.  Again, it always makes me feel awful to say I loved a book such as this, but I did!  The story of these women is told with compassion, empathy, and a very real sense admiration.  Though Claire, Mireille, and Vivienne are fictional characters, the most certainly represent real women who sacrificed everything to help bring evil to an end.