Review: Out with the Ex, In with the New by Sophie Ranald

Posted on January 2, 2020 by rolopolobookblog 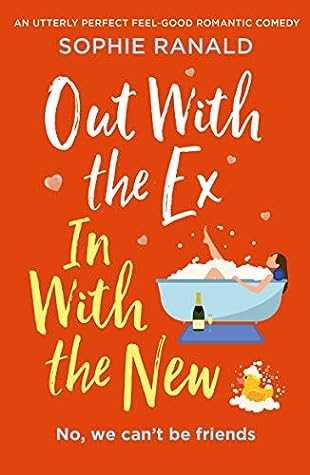 Gemma didn’t expect her life to look like this. She’s still living with her mother, who steals her leggings and tells her off for leaving crumbs in the butter. After twenty failed interviews she thought she’d bagged her dream job as a journalist – except it turns out to be writing articles about cats that look like George Clooney. Luckily she has her wonderful boyfriend, Jack, to help her forget just how rubbish things are.

Then Jack dumps her out of the blue. With nothing but her childhood teddy bear, Stanley, and a whole heap of heartbreak, Gemma resolves to turn things around. She throws herself into her new job and soon she’s hanging out with cheeky, golden-haired hunk Charlie, eating in swanky restaurants and sipping trendy cocktails – and her old life seems like a distant memory.

But it’s not long until her shiny new world starts to lose its sparkle – and Gemma misses the days of wearing battered pink converse and eating peanut butter on toast in bed. Then Jack turns up, backpack in tow, and things starts to go wrong with Charlie. ‘Out with the old, in with the new’, the saying goes. But what happens if neither one is quite right?

Gemma has three goals in life: 1) to marry her long-time boyfriend, Jack; 2) to land a job as a serious journalist and; 3) to become YouTube famous.

Gemma has spent a year pounding the pavement looking for a job.  She has what it takes to be a fine journalist, but no one seems to want to take a chance on her.  Through what feels like a thousand interviews, Gemma has kept her attitude positive and hopeful, leaned on Jack for support, and continues to ever so slowly grow her YouTube following with make-up tutorials and interactions with her followers.  Gemma knows, if she keeps plugging along and doing her best, all her goals are totally achievable.

With a spring in her step and load of enthusiasm, Gemma rushes off to meet Jack to share her wonderful news.  Not only has she gotten a job, but she’s gotten a job with an up and coming site that has loads of room of growth and advancement; she has to start at the bottom, but that’s OK, because Gemma finally has a job!  Unfortunately, on the same night she shares her wonderful news with Jack, Gemma also finds herself without a boyfriend.  Jack doesn’t just dump Gemma, he crushes her heart and obliterates one of her goals, all so he can go gallivanting around the world with his best friend . . . . who happens to be a woman ☹  In a fit of despair, Gemma unloads all her pain and sorrow in a video she impulsively loads to her YouTube channel.  As it happens, her brutal honesty not only gets the attention of her regular followers, but a host of newbies.  Who knew heartbreak could help make one famous?

As the days and weeks trudge along, Gemma settles into her new job (not quite as posh as she originally thought!), her new living arrangement (far creepier than she suspected!) and begins to see real growth in her quest for fame. Gemma’s new life goals is to show Jack exactly what he gave up and, in an effort, to achieve that goal, Gemma finds herself tied up with a hot new boyfriend who is one part of a YouTube sensation.  Her attachment to Charlie seems tremendously fine at first with invites to the swankiest parties, mentions of her attachment to Charlie on all the social media platforms, people recognizing her on the street, and a new agent helping her grow her own channel and following.  The days and nights spin out of control in a haze of dates, late nights, new videos for her channel, her increasingly boring job, and her increasingly troublesome home environment.  Though Gemma tries to project an air of footloose and fancy-free (take that, Jack!), her original followers notice a stark change in Gemma and it’s not one they are at all happy about.

To her new followers and “friends” Gemma seems to have it all.  What those new followers and friends don’t know and/or see is the turmoil constantly bubbling under the façade of chic, on the rise woman living her best life.  Gemma is tired all the time, her work, such as it is, is suffering, and her original followers are put out with her vapid new videos and tutorials.  What’s more, Charlie is sort of an ass and her landlords are the kind of trouble no one wants to be a part of.  After a series of serious and rather awful events, Gemma finally pulls her head out of her ass and finally begins making decisions that not only better align with her own true attitude and moral compass, but truly allow her to become YouTube famous for all the right reasons.

The Bottom Line:  I struggled with this book, in large part, because I struggled with Gemma as a character.  The first two-thirds of the book I found myself wondering if Gemma were actually too stupid to live!  She comes across as a flighty, immature girl whose only mission in life is to have everyone know and adore her.  Really?  In this day and age, that’s all you’ve got?  While it seems, I should have DNF’d the book at this stage, I hung on and was richly rewarded for my efforts and stubbornness.  As things in Gemma’s life become quite serious – for example, the situation her landlords find themselves in – Gemma rises to the occasion and sheds the self-centered and selfish façade to reveal a real and even admirable human being.  Gemma finally begins to understand that she has real talent as a writer, real compassion for others, and when she lets those qualities shine, she becomes a person everyone really does want to know and, dare I say it, emulate.  I don’t think I would bill this read as “a laugh-out-loud romantic comedy” (as it has been!) but as a more serious read that deals, in large part, with the sad state of our society as a whole.  Gemma has to come to terms with the fact that YouTube famous isn’t real life and real life is often hard, messy, painful, and demanding, but it is also the part of people that other people respond to, pay attention to, and generally like.  Gemma shows tremendous growth throughout this read and I was left feeling a bit more hopeful about the real Gemma’s out there in the world.  There is a life beyond the superficial and sometimes, that life is quite spectacular.