Posted on January 1, 2020 by rolopolobookblog 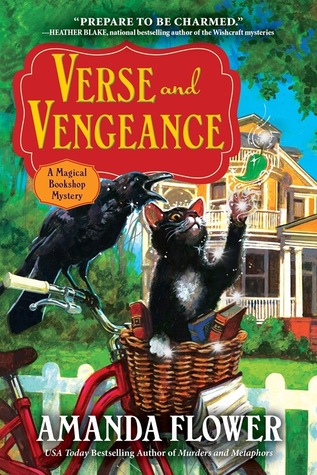 A bicycle race is not Charming Books proprietor Violet Waverly’s idea of a pleasant pastime. But police chief David Rainwater wheelie wants them to enter the Tour de Cascade as a couple, so she reluctantly consents.

The Tour de Cascade is the brainchild of Violet’s Grandma Daisy. The race is a fundraiser to build the Cascade Springs Underground Railroad Museum. But not everyone in this Niagara Region village supports the race. As if the bike race weren’t tiring enough, pesky private investigator Joel Redding is snooping around Charming Books. It takes all of Violet’s and Grandma Daisy’s ingenuity to keep Redding from discovering the shop’s magical essence–which communicates with Violet through books.

When Redding perishes in an accident during the race, David discovers that the brake line of the private eye’s bike was cut. Worse, Violet tops his list of suspects. As Emerson the tuxedo cat and resident crow Faulkner look on, Charming Books steers Violet to the works of Walt Whitman to solve the crime. But no other names ring a bell as culprits, and as David’s investigation picks up speed, Violet will have to get in gear to clear her name.

Violet Waverly is on break!  She has finished her PhD, her classes are done for the term, and she’s meant to be enjoying her time away from all the hustle and bustle of everyday life.  That’s generally easier said than done.  Violet’s bookshop is still open, her grandmother is the new mayor, and the town is gearing up for a huge fundraising event.  Oh, that pesky private eye, Joel Redding hasn’t given up his interest in Violet and her bookshop.  So much for break!

For days, Violet has spied Redding outside her bookshop poking around and generally loitering.  She has no idea what Redding knows, but if he finds out her secret and the secret of the bookshop, all good be lost for Violet and her grandmother.  As keepers of the tree, the women of Violet’s line have long cared for the tree the bookshop is literally built around and gone to great lengths to help the people of their community.  To make this knowledge public would likely endanger Violet and her grandmother as it did in decades past.  Though she can’t give away much, Violet has to know what Redding knows and try to dissuade him from further investigations.  As it happens, someone else feels the same way about Redding and arranges a tragic little accident that not only helps Violet and her grandmother, but other unknown people(s) as well.  Trouble is, by helping Violet, it’s also made her a suspect in Redding’s death.

Just as soon as the death occurs, the bookshop begins offering Violet clues to solving the crime.  This time, the bookshop is offering up a little “light” reading in the form of Walt Whitman.  Both Whitman and Redding’s death are terribly complicated, and Violet finds herself with a mountain of questions and very answers.  What’s more, the further Violet digs into Redding’s death the more confused she becomes.  Somehow, her boyfriend’s sister is wrapped up in the mess, her grandmother’s pet project, the Underground Railroad Museum is connected to the whole ordeal, one of her former students is on the lam, and her wandering father is back in town with information that may help solve the crime.  With so many disparate pieces, Violet is going to have to work harder than ever to solve this mystery.

As the case trudges on and Violet continues to uncover clues, she also continues to frustrate and concern her boyfriend, Chief Rainwater.  As history has shown, the women in Violet’s family don’t fare well with love and divulging her secret could risk her budding romance with the police chief.  The trouble is, not telling Rainwater is absolutely causing problems and trusting David feels like the right thing to do.  With David on her side and fully in the loop, there’s really not much that can stop the two from continuing to enjoy one another’s company and solving a most perplexing crime.  Taking a chance never hurt anyone, right?

The Bottom Line:  As a series grows, it is often hard for the author to keep the storylines fresh and interesting.  Thankfully, that has not yet been a problem with Magical Bookshop Mystery series.  Violet continues to grow as a character, her life in Cascade Springs is certainly evolving, and the other characters are growing and changing right along with Violet.  While I am admittedly a huge fan of characters and characterization, I think what I love most about this series is its rich environment and the emphasis on literature and reading.  It isn’t a “You must read!” sort of thing, but an element of the story that not only helps solve the crime du jour but also introduces the reader to some of the history surrounding the authors the bookshop chooses for Violet.  When you add the literal environment of the bookshop and the town to the literary aspect, you have a recipe for a successful series and a world of room to grow.  This series is finding its stride and with so many authors to choose from, I see nothing but a promising future for this series.

← Spotlight and Sweepstakes: Reckless Abandon (Book #1: A Beautiful Liar Series) by J.N. Owens
Review: Out with the Ex, In with the New by Sophie Ranald →