Review: The Second Life of Nathan Jones by David Atkinson

Posted on December 2, 2019 by rolopolobookblog 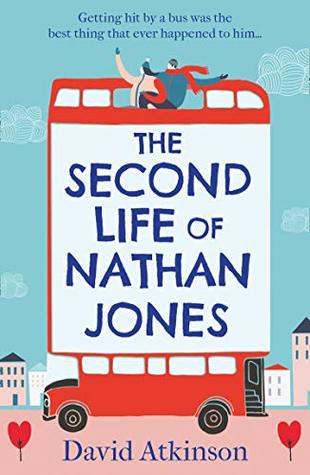 When one wrong step – and the poor timing of the number 19 bus – send Nathan Jones to the Edinburgh morgue his story should have ended…but then he went and woke up.

Returned to real life Nathan finds a wife disappointed that he’s miraculously returned from the dead and an unshakeable attraction for mortuary technician Kat – the woman who brought him back to life, in more ways than one.

Now, as his world implodes and Kat leads him down an unexpected path, Nathan somehow finds himself having the time of his second life…

Nathan Jones isn’t leading what most would call a stellar, totally fulfilling life, but it’s better than no life at all.  Oh, Nathan knows his marriage is rubbish and his wife is a cow, but his daughters are delightful and being with them means everything to Nathan.  Things aren’t perfect amongst the living but waking up in a morgue is even worse.  Just ask Nathan Jones.

Kat’s never met a real zombie, but Nathan Jones seems to be just that, a real, live returned from the dead kind of zombie, but don’t call him that.  Nathan Jones is also immensely attractive and from the moment she meets him, Kat is intrigued by the man who returned from the dead.  Getting to know Nathan Jones isn’t going to be easy, but nothing worth it in this life is easy.  Against the advice of her best friend, Kat sets upon a course that will bring her the greatest pleasure and the greatest heartbreak she has ever known in her life.

Nathan Jones thought dying and returning from the dead was the worst thing he was going to face in his, well, life.  As it turns out, the worst thing he must face is the prospect of his wife leaving him and taking his beloved daughters with him.  If it weren’t for Kat and her plan to know Nathan Jones, he would be completely alone and totally lost.  Kat is unlike anyone Nathan Jones has ever met.  She’s Goth (not punk!), wildly inappropriate, kind, generous, and the most delightfully weird person Nathan Jones has ever known.  If Kat thinks it, she says it, if she enjoys it, she does it, and if she wants it, she goes for it.  For Nathan Jones, Kat is a bit a refreshing, a breath of fresh air in a life (and death) that had otherwise become tolerable, at best.

Kat completely understands the mess she is getting herself into.  Nathan Jones doesn’t come with baggage; he comes with a cargo plane filled with baggage.  He’s not technically divorced, his girls are a consideration, and there is always the possibility he doesn’t actually like Kat.  In short order, the last bit is answered, a trip to the zoo goes a long way in smoothing the path with the girls, and the first is just a volcano waiting to erupt.  Yes, Kat is absolutely insane to even consider becoming involved with Nathan Jones, but something about him screams special and worth it, so Kat soldiers on.

The time Kat has with Nathan Jones is both exhilarating and turbulent.  Nathan Joens’ wife has no intention of going away quietly into the night; in fact, Nathan Jones’ wife has every intention of living up to her reputation as a cow and looks to make life miserable for everyone, Kat included.  As the cow’s plans unfold, both Kat and Nathan Jones are brought to the lowest point of their respective lives.  Nathan Jones is on the verge of losing his girls for good and Kat is as heartbroken as she every could have imagined.  With no real hope left, the two part ways and hope there comes a day when the pain isn’t quite so potent.

The Bottom Line:  The Second Life of Nathan Jones is one of those books whose Goodreads star rating totally baffles me.  I found this book to be smartly written, wickedly funny, and appropriately emotional.  This isn’t just the story of Nathan Jones and his miraculous return from the dead, it’s the story of a group of people, some incredibly broken and misguided, crashing into one another and trying to make the best of it all.  Every character is clear and full, the plot is a train wreck in the best possible way, and I simply couldn’t put this book down.  This really is an emotional roller coaster of a ride that is tempered with a good bit of dark humor, sarcasm, witty banter, awkward moments, and a few naughty bits thrown in for good measure!  In all, a fine read.

← Review: Out of the Picture: A Shepherd Sisters Mystery by Tracy Gardner
Review: The Perfect Brew (Book #1: Perfect Brew Series) by Jo-Ann Carson →