Posted on November 21, 2019 by rolopolobookblog 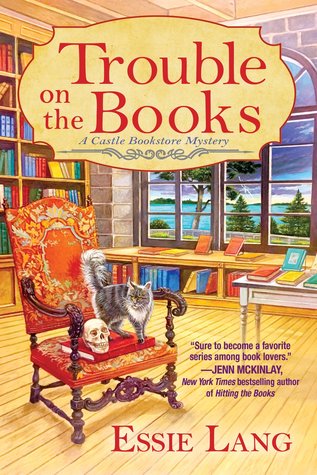 Shelby Cox never intended to become a bookseller, so when the former editor returns to her hometown of Alexandria Bay, nestled in upstate New York’s breathtaking Thousand Islands region, to take over her aunt’s bookstore, she has no idea what to expect. To her amazement, she discovers that she now owns a fifty-percent share in Bayside Books, and will also run the store’s second location in the majestic castle on nearby Blye Island.

But just as Shelby is gearing up for the start of the tourist season, the Castle volunteer coordinator is found murdered in the nearby Grotto. Castle caretaker Matthew Kessler is suspect number one, but Shelby thinks the killing may be connected to an earlier era, when violence among Prohibition-era smugglers was rampant in the region. As Shelby launches her own investigation, handsome and unnerving Special Agent Zack Griffin of the Coast Guard Investigative Services tries to quell her smuggling theory and keep her safe. But Shelby is determined to summon all her savvy as a book editor to plot the murder—and find the killer before he strikes again—in Trouble on the Books, Essie Lang’s clever and captivating series debut.

The Bottom Line:  I think the thing I enjoyed most about this book is the setting.  It’s hard to dislike a setting that involves a lovely island locale, and old castle, and a couple bookstores.  I wish as much thought and effort had gone into the plot and the characters as was put into the setting.  In truth, it is the description of the setting(s) which is very clear and interesting that kept me reading this book more than the plot and characters.  I found the plot to be somewhat flat and many of the characters to be unrealistic and ill-defined.  In general, cozy mysteries, especially those involving a bookshop keep me hooked and speed-reading, but the failures in the characters and plot had me plodding through this book and it took me an extended amount of time to get through it.  With that being said, I always take into account the first-in-a-series status of a book and feel I should give the series, especially one in such a lovely location a second chance.

← Review: Shall We Dance? (Book #1: The Dance With Me Series) by Shelley Shepard Gray
Mini-Review: Death on the Page (Book #2: Castle Bookshop Mystery) by Essie Lang →