Posted on November 19, 2019 by rolopolobookblog 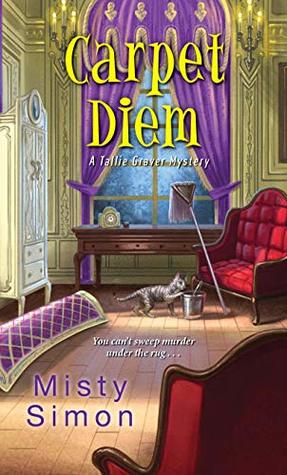 Now that Tallie Graver’s cleaning business is starting to shine, she’s ready to go squeegee to squeegee against Audra McNeal for a major contract at the Astercromb mansion. Tallie’s not afraid of a little friendly competition from the new cleaner in town. In fact, Tallie likes Audra, though she wonders how her glamorous rival manages to clean house and maintain her fancy manicure. Tallie has her rubber-gloves full staying one step ahead of her nemesis. Until she finds a well-polished hand poking out of a rolled-up carpet, rendering her competition . . . dead.

Though it lands Tallie the big job, there’s nothing tidy about Audra’s death. So between polishing and scrubbing, Tallie’s determined to find the killer. Hopefully the police chief doesn’t mind her cluttering up his investigation with the filthy dealings she discovers. Turns out Audra was not as squeaky clean as she appeared. And confronting her killer could bring Tallie to a very foul end indeed . . .

Tallie Graver never thought her life would be fulfilled by cleaning toilets, dusting bunnies, and vacuuming with a perfect top of the line vacuum.   Tallie loves her vacuum, her clients are generally quite lovely, and Tallie’s business, thanks to those lovely clients, has grown to include an actual crew of cleaners.  Yeah, when you throw in her awesome boyfriend, Taliie’s life is quite fulfilled.

Feeling feisty and all kinds of confident, Tallie decides to throw her hat in the ring for a HUGE local cleaning contract.  Once upon a time, Tallie and her ladies were the only game in town, but now she has some friendly competition.  Tallie totally knows her crew are the best in the business and a little friendly competition never hurt anyone  . . . . except the actual competition.  Shortly after the maid service auditions, Tallie finds the body of her only competition, her precious vacuum is caught up in the fray, and the sheriff is once again very displeased.  Very. Displeased.

Being sucked into another investigation means less time with her handsome boyfriend, grief from her family over her involvement and the possible danger, and the incredible displeasure of the sheriff.  To be fair, Tallie didn’t go looking for a new investigation, only her vacuum!  What’s more, even with the sheriff’s great displeasure, even he has to admit, people will talk to Tallie and reveal things they simply won’t say or reveal to the police.  As Tallie begins to poke around and aske questions, she uncovers on inconsistency and lie after the next leading her to believe, her friendly competition wasn’t as friendly as she initially believed.

In the midst of all her investigating, Tallie also has to deal with the fallout from her family and the ever-evolving nature of her relationship.  Her family is, yet again distraught over Tallie’s investigative inclinations, the funeral home is in desperate need of Tallie’s help (UGH!), and her boyfriend is contemplating some big life changes that will absolutely impact Tallie and their future together.  Juggling forty-two balls at the same time isn’t easy and if Tallie drops even one, her very fulfilled life may just come crashing down all around her.

The Bottom Line:  I truly believe this series is picking up steam with each new installment.  Tallie is becoming not just a character I like, but a beloved character whose world I very much enjoy returning to time and again.  There’s no stagnancy in this series; in fact, every aspect of this series is evolving, and this is something I find I must have in my reads.  Tallie’s personal life takes a significant turn in this book, her business is becoming a small empire, and her relationship with the sheriff and involvement in murder investigations is changing too.  The evolution I’m seeing in this book/series is making it stronger and creating a real connection to the characters for me.  I want to know more about these people, the town, and the next investigation Tallie is going to find herself a part of.  In all, the Tallie Graver Mystery series may be one of my favorite cozy mystery series.

← Excerpt: Never Retreat by Bonnie McCune
Review: Shall We Dance? (Book #1: The Dance With Me Series) by Shelley Shepard Gray →