Review: The Body in the Gravel (Book #3: A Jazzi Zanders Mystery Series) by Judi Lynn

Posted on October 10, 2019 by rolopolobookblog 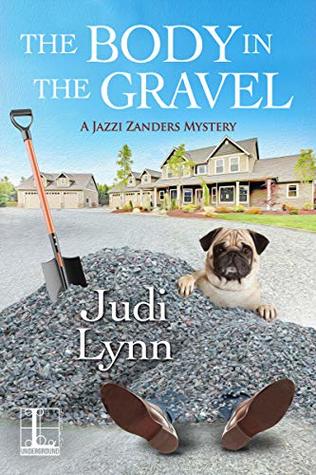 House-flipper Jazzy Zanders has her work cut out for her. Her latest flip, which she co-purchased with her fiancée Ansel and cousin Jerod, is a three-story fixer-upper that’s more of a droopy-downer. One corner of the house is sinking and needs to be jacked up with a new cement foundation. That costs money. And causes headaches. And creates a work environment that’s not only hostile, it’s downright deadly . . .

Jazzy knows it’s a tough job. Which is why she hired Darby to lay the cement. But when Darby gets into a fiery argument with the furnace man—and then never shows up to lay gravel for the driveway—Jazzy starts to wonder if the rumors about Darby are true. Did he kill his wife and son and bury them in the yard like some folks claim? When Darby’s dead body comes pouring out of a gravel truck, murder upstages the real estate market as her biggest concern . . .

Can’t a girl get through one house renovation without a dead body showing up?  Thankfully, for we readers at least, the answer to that is a resounding “NO!”  In fact, not only does yet another dead body get dumped (literally!) into Jazzy’s life, but so does a huge list of potential suspects.

Jazzy, Ansel, and Jerrod have taken on a whale of a project.  An older three-story home with a lot of potential and enough issues to need a shrink!  As always, the trio has a plan in place and that plan involves getting all the exterior work done before moving to the interior.  A part of the exterior involves bolstering the foundation and completely reworking the driveway.  That means cement, and a lot of it.  As always, the flippers call in their go-to guy for cement, Darby, a surly bastard who is not known for his sunny disposition or good attitude.  Thanks to his nasty reputation, it really comes as no surprise to anyone when the gravel base for the driveway is being poured and Darby comes out too.

As if it’s simply a foregone conclusion, Detective Gaff ropes Jazzy into the investigation and the hunt for a killer begins.  As if looking for a killer weren’t hard enough, Jazzy and Gaff quickly figure out, not only did Darby have no friends, but he did have a great number of enemies. At the top of the list, Jazzy’s sort of brother-in-law, all the men who worked for him, his son and ex-wife who have been missing for two years, and his housekeeper.  Narrowing down the list takes a great deal of patience, finding the right questions to ask, and untangling the last days of a man no one liked and was clearly falling apart.

At the same time Jazzy is trying to untangle the life of a right bastard, she’s also trying to put the finishing touches on her upcoming wedding to her Viking, Ansel.  The food is planned, the venue is ready to go, the guests have been invited, and the plan is in place.  The only thing missing, a wedding dress!  As the days roll by, Ansel begins to worry about Jazzy’s commitment to their life together.  Though Jazzy assures Ansel she is all in for the long haul, her Viking still worries. What’s more, Ansel also has mixed feelings about the presence of his completely awful family.  It’s meant to be a day of happiness and new beginnings and all Ansel can do is fret which, in turn, causes Jazzy to worry more.

The Bottom Line:  The Body in the Gravel has so much going on that it easily could have become a hot mess.  Instead, the seasoned Lynn juggles multiple plot lines, a multitude of characters, and a fine mystery with an organized and collected plan.  Nothing and no one got lost in the mix, all the loose ends are neatly tied up by the end, and there are even a few fun little surprises.  The Jazzy Zanders Mystery series seems to be gaining strength and speed with each new book and I am thrilled with this development.  I need my characters and their world to evolve and I am certainly getting just that with this series.  As much as the characters and the plots, I also enjoy the discussions and descriptions of the work Jazzy, Ansel, and Jerrod are doing and, of course, all the good food Jazzy serves up.  In all, I can’t find a flaw with this series and look forward to it having a long and lovely life.