Posted on October 3, 2019 by rolopolobookblog 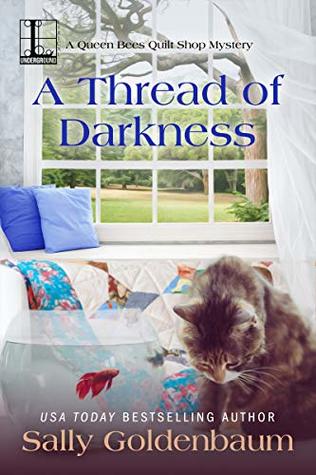 As owners of the popular bistro The French Quarter, former New York City restauranteurs Picasso and Laurel St. Pierre are the toast of the town of Crestwood, Kansas. Chef Picasso’s culinary creations delight the women of the quilting club, who have embraced him as a friend. But Laurel’s anti-social behavior confuses Kate Simpson—until she spots Mrs. St. Pierre with another man in what appears to be a lover’s spat.

Gossip travels fast in a small town like Crestwood, and rumor has it this isn’t Laurel’s first indiscretion. She also filed a police report accusing Picasso of domestic abuse. And when Laurel’s murdered body is found Picasso is the prime suspect. To prove their friend’s innocence, Kate and the Crestwood Quilters must uncover the secrets of Laurel’s past—a patchwork history wrapped up in Kate’s own teenage years . . .

The Bottom Line:  I had hoped the second book in the Queen Bees Quilt Shop Mystery series would have ironed out some of the issues I had with book one.  Unfortunately, the ironing out is only marginal and it has left me wondering about my future with the series.  Once again, the cast of characters is extraordinarily large with only a few playing a vital role, the scenes of quilts and quilting (which I greatly enjoy) are few and far between, and the plot is somewhat contrived.  To be fair, the plot is less contrived than in the first book and I enjoyed it more, but it still felt just a bit too forced for my overall liking.  What’s more, I would have thought more of the women in the quilting group would have played a more visible and active role in this book, but alas, Po is still the most prominent and that limits my ability to connect with and like other characters.  At the end of it all, I realized I had to somewhat “force” myself to finish this book and that is never a good thing.  For the time being, I think I am done with this series.