Posted on October 2, 2019 by rolopolobookblog 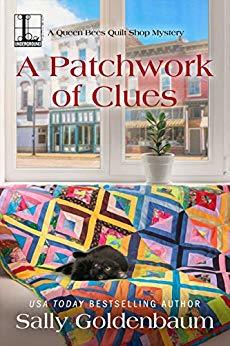 On her morning jog, Portia Paltrow comes upon the dead body of antiques store owner and college professor Owen Hill, sprawled across the back doorstep of Selma Parker’s fabric and quilt shop on Elderberry Road. The site of their Saturday morning quilting bee just became a crime scene. Violent crime is rare in the charming village of Crestwood, Kansas, and rumors are soon circulating of a burglary gone wrong. But who would rob a quilt shop? No, Owen Hill has been murdered.

Selma and her assistant manager Susan are understandably at loose ends over the crime. So while the tightly knit covey of quilters—who range from a new mother to a wise octogenarian—work together on a Crystal Pattern quilt for Selma’s store’s anniversary, they also get busy stitching together a patchwork of clues. But they’d better work fast—before a crafty killer bolts . . .

The Bottom Line:  Cozy mysteries are among my favorite books because they tend to be lighter, quirkier, set in a small town, and full of fun characters who become very real to me by the end of the read.  While some of this holds true for A Patchwork of Clues, not all came through as successfully as I would have liked.  The small-town setting is lovely, and I especially enjoyed the scenes that involved quilts and quilting, but everything else felt a bit too much. For example, the quilting group consists of several women but not all play a huge role in this book so keeping track of all of them (and their partners!) became bothersome.  Because of this, I found it difficult to become attached to or really enjoy the characters.  In addition to the character issue, there is also the issue of the plot.  The plot isn’t hard to follow, but it did feel contrived and overly convoluted; by the time the big bad was revealed, I found I really didn’t care that much anymore.  While all of this sounds largely negative (and it is) I have chalked it up to the normal first in a series issues and have high hopes the second book in the series will have ironed out the issues.