Posted on September 6, 2019 by rolopolobookblog 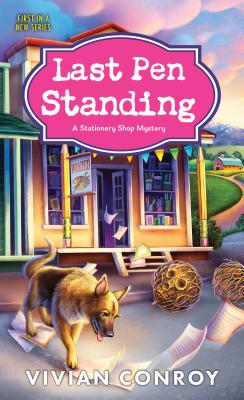 As the new co-owner of Tundish Montana’s stationery shop WANTED, Delta Douglas knows how to organize a killer crafting event. Creativity and cardstock are all she needs to move one step closer to her ultimate dream: developing her own line of crafting products. But on the night of the workshop, at the swanky hotel venue, glitter isn’t the only thing found sprawled on the floor. A hotel guest is discovered dead in the bar, and amid the confusion, Delta’s best friend is suspected of the crime.

Enlisting the help of her Paper Posse and Spud, her canine sidekick, Delta dives into the investigation. But with many high-powered suspects on the line, Delta soon realizes her sleuthing may come with deadly consequences.

Delta Douglas’ new life is just beginning, and she couldn’t be more excited.  With the financial backing she has always lacked now secured, she’s quit her job, packed her bags, and made the big leap (and move) to Tundish, Montana.  In Tundish, Delta will find not only her best friend but the stationary store, Wanted she just bought a half interest in.  For the first time in her life, Delta will be her own boss and be able to use her art skills for something far more satisfying than a client’s project.

Unfortunately, before Delta can even take a breath and get settled into her new life, she and her best friend get wrapped up in a murder that threatens to destroy everything Delta has dreamed of for so long.  Being new to town, Delta doesn’t know anyone but the sight of a dead body, known or unknown is still a great shock.  What’s more, even though Delta doesn’t know the deceased, it seems her best friend’s brother does and he’s the prime suspect in her murder.  Though Delta certainly had no intention of becoming involved in the investigation, when her best friend, along with her bestie’s brother is taken into custody, Delta has no choice.  Becoming involved in the investigation is the only way of saving her best friend, her best friend’s brother, and her beloved little stationary shop.

Being new to town puts Delta at both an advantage and a disadvantage.  While she can roam around town and seem to be innocently inquiring about the murder and the people involved, her innocence act will only get her so far.  What’s more, knowing who to trust, outside of her best friend, is a bit of a problem until she meets Jonas, a former K9 cop with nothing, except a drive for justice, invested in the outcome of the investigation.  Jonas, with his keen insight, critical mind, and K9 companion, Spud, are the perfect investigative partners. Jonas is able to help Delta focus her questions, organize her thoughts, and Spud is able to sniff out all kinds of curious bits.  With every new answer, Delta has two additional questions, and the closer she gets to figuring out the whole mess, the closer she gets to real danger.

The Bottom Line: I find myself stuck absolutely in the middle on this book; I can’t say I liked it, but I also can’t say I disliked it.  I found Delta to be a rambler and that often caused me to lose focus on her thoughts/questions/ramblings.  Once she met Jonas and became a bit more organized, Delta became easier to follow and, in a way, more likeable.  I liked the plot well enough and there were certainly enough twists and turns to remain interesting, but Delta’s ramblings . . . . again, sometimes distracted from the plot.  The highlight of the read for me was Jonas and Spud, his K9 companion. I found myself very much digging into the scenes that involved them as they both brought a sense of calm, organization, and clarity to the chaos and as the series continues on, I certainly hope Jonas and Spud continue to play a vital role in Delta’s life and investigations.  In all, I wanted to like this cozy mystery, but I think it fell into many of the first-in-a-series traps and that kept me from really being able to enjoy the story.  With that being said, there were some bright spots in this book, and I am absolutely willing to give the second round a chance in the hopes the rough spots will have been ironed out.