Posted on August 28, 2019 by rolopolobookblog 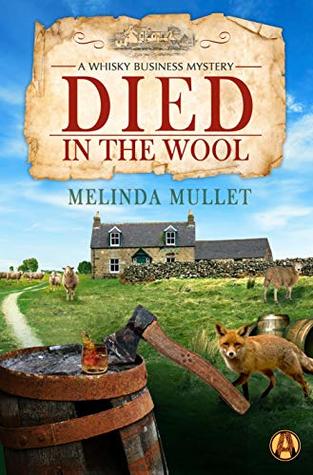 Photojournalist Abi Logan is finally ready to put her hectic career on hold and set down roots in the heart of the Scottish countryside. Studying the business and art of distilling whisky at Abbey Glen and volunteering at the Shepherd’s Rest women’s shelter in her spare time seem a surefire way to find the peace and stability she craves. It’s also the logical way to take her mind off her personal life. Abi’s business partner, Grant MacEwan, is facing a career-threatening disability, and as much as Abi longs to be there for him, he seems to prefer the company of a rival.

But as Abi becomes more involved with Shepherd’s Rest, she discovers that their refuge is elusive. When the shelter is rocked by a murder/suicide, Abi is outraged by the police’s lack of attention to these already marginalized women. Increasingly confident in her own skills as an investigator, Abi steps in to find out what the police will not: who left one young woman dead and another missing. But when more deadly deeds come to light, Abi must race to unravel the connections between the shelter’s benefactors and the women they have pledged to protect—and expose the killer before he strikes again.

Life at Abbey Glen is nearly perfect for Abi Logan.  She has settled into her role as part owner of a distillery, she is taking classes to learn more about the fine art of distilling whisky, and her herd of geriatric sheep are loving their life as Abi’s pets.  In fact, Abi has been in the community long enough that she has not only been accepted by the locals but often called on to help with certain issues, problems, if you will.  While Abi has not once advertised herself as or called herself a detective, she seems to find trouble wherever she goes, and that trouble always leads to investigating.

Abi’s latest foray into community involvement has come at the behest of the local vicar.  When a man of God suggests you check on the women at the local women’s refuge, you do so.  What Abi finds when she calls on the women of Shepherd’s Rest is a place to unload the wool recently shorn from her geriatric sheep and a house in disarray thanks to a recently committed crime.  All the women at Shepherd’s Rest are seeking shelter and refuge from abusive relationships.  Shepherd’s Rest allows the women to get back on their feet, find their confidence, and reenter the world with a sense of safety and security.  For one of their own to be so brutally taken from them shakes the foundation of the refuge and demands answers.  Abi isn’t about to let these women suffer more than they already have which means she’s going to go poking her nose into a lot of people’s business.

With her usual tenacity and dogged determination, Abi begins to peel back the layers of a young woman’s death.  What she finds is corruption, greed, abuse, blackmail, drugs, and a whole host of other forms of awful.  The men and women involved view themselves as untouchable, as above petty things like the law, and see Abi as nothing more than an obstacle to be dealt with.  What all involved don’t know or understand about Abi is her courage, her ability to face down and expose an enemy, and unwillingness to allow a crime to go unpunished.  What’s more, Abi isn’t ever alone in her investigations and with the help of her friends she finds the answers she’s looking for and more than her fair share of danger.

The Bottom Line:  This series is getting better and better with each succeeding book!  For only the second time in the series, Abi’s involvement in a crime/investigation doesn’t directly involve Abbey Glen or whiskey and while I certainly like those aspects of the series, it is also a nice change of pace.  While I certainly enjoyed the plot, what I enjoyed more than anything else is how much Abi has become a part of community and her environment.  In a short time, Abi has become as much a part of the fabric of Balfour and Abbey Glen as its natives.  Abi is a part of the community and that not only brings her happiness and contentment, but a real sense of belonging that has long been absent from her life.  Her life, both personal and professional are evolving and that is going to keep me coming back for more.  Oh, and her ever-growing herd of geriatric sheep 😊