Review: Don’t Give Me Butterflies (Book #3: The Holloway Girls Series) by Tara Sheets

Posted on August 14, 2019 by rolopolobookblog 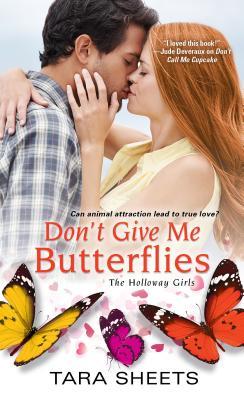 As the Queen of Impulsive Decisions, Kat Davenport has found herself without a job or a place to live. So settling on Pine Cove Island isn’t the sanest choice–meaning it’s perfect. Like the mysterious Holloway cousins, Kat has her own unique gift. In her case, it’s a knack for communicating with animals. Which makes getting hired at the local animal shelter feel like kismet. Especially when she finds a room to rent at a nearby lavender farm–complete with a sweet landlord and her brawny grandson–a guy who happens to give Kat an all-too-familiar flutter in her stomach…

Jordan Prescott isn’t back in Pine Cove to find romance. He’s here to sell the family farm, a fact that bewilders Kat. A former foster kid, she can’t understand why he’d give up his childhood home. So when the big-hearted beauty starts bringing home strays from the shelter, Jordan is suddenly her adversary. Until their fiery disagreements turn into fiery kisses…

Now Kat is falling for a man who will likely make her homeless yet again. Unless she learns how to lend her considerable powers to taming the beast lurking inside this prince…

“I’ve never done this,” she mused.

“Had s’mores and beer with a donkey in the middle of the night?  Me neither.”

Jordan Prescott couldn’t imagine a place a he wants to be less than Pine Cove.  If it weren’t for his beloved grandmother, Jordan would have never returned to his hometown and the memories that have haunted him for the bulk of his life.  Jordan’s time in Pine Cove is going to be as short as is humanly possible and once he leaves, there will never be a reason to return.

Jordan’s goal is to get his family’s failing lavender farm into shape, cleaned up, and on the market in as little time as possible.  Though he more than has the money to have the work done from afar, Jordan knows coming home and dealing with the issues in person will also help him deal with his own demons.  In addition, seeing his grandmother and getting her settled is an added bonus.  Finding the woman he’s always wanted and falling in love, not on the agenda.  Finding a woman with an unusual connection to animals and magic who has no interest in ever leaving Pine Cove, absolutely not on the agenda.

Kat Davenport has never had a true home.  As a foster child with an unusual gift for communicating with animals, finding a forever home was never in the cards for Kat.  On impulse, Kat recently decided to stay in Pine Cove in the hopes of turning over a new leaf and finally finding a place for herself in the world.  Her first order of business is finding a new job and a place to live: the job is covered by the local pet rescue facility and the place to live is covered by Jordan Prescott and his garage apartment.  Though her relationship with Jordan isn’t stellar, Kat needs a place to live and the farm is quite ideal.  Add to the perfection of the site the space for rescue animals and Kat feels she’s found her version of heaven.  With the help of Jordan’s enthusiastic grandmother, Kat is able to give a home to a three-legged dog, a pregnant kitty, a hyperactive goat, and set of cocooned butterflies.  While Kat, her animals, and Jordan’s grandmother are thrilled with the arrangement, Jordan is less so and takes every opportunity to remind Kat of the temporary nature of their arrangement.

As so often happens in Pine Cove and especially with the Holloway’s, there is magic afoot and acting on all the players.  Kat finds a most unexpected connection to the Holloways, her job and living arrangement provides her with a very real way to help the animals she so easily communicates with, and Jordan, under the crusty, sexy exterior proves to be quite a wonderful surprise.  For Jordan, the magic isn’t quite as real as it is for Kat, but it is certainly working on him.  The time spent on the farm causes Jordan to not only deal with his issues related to his parents, but to reevaluate his own life, wants, and desires.  Jordan is stubborn and it isn’t until he has lost everything that he pulls his head out and admits the truth of his heart.

The Bottom Line: There is so much to love about this book and I just going to call it right here and now, this is the best book in the series.  Kat isn’t just delightful, she’s a load of wonderful and her affinity with animals makes her so very special.  I devoured every interaction between Kat and her animals and reread several passages just to take it all in again.  Jordan is one of my favorite character types, the tall, broody, sexy man who thinks he knows it all until he encounters what it is he truly needs to have and know it all.  My favorite example of this in this book is undoubtedly Jordan’s responses throughout the book to Clementine and her babies.  I also quite enjoyed the interaction with the Holloway house!  The house is in fine form in this book and it becomes a very real part of the story and bringing Kat into the fold.  In all, this is a wonderfully imaginative feel-good read that had me hooked from page one; seriously, I read this thing in a single sitting 😊  If this is, as I suspect, the end of this series, then Don’t Give Me Butterflies is the perfect end to a fantastic series that has really brought me a great deal of pleasure.