Review and Excerpt: A Highlander Walks into a Bar (Book #1: Highland, Georgia Series) by Laura Trentham

Posted on August 2, 2019 by rolopolobookblog 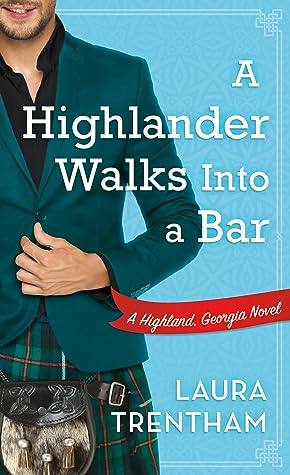 Isabel Buchanan is fiery, funny, and never at a loss for words. But she is struck speechless when her mother returns from a trip to Scotland with a six-foot-tall, very handsome souvenir. Izzy’s mother is so infatuated by the fellow that Izzy has to plan their annual Highland Games all by herself. Well, not completely by herself. The Highlander’s strapping young nephew has come looking for his uncle…  Alasdair Blackmoor has never seen a place as friendly as this small Georgia town—or a girl as brilliant and beguiling as Izzy. Instead of saving his uncle, who seems to be having a lovely time, Alasdair decides he’d rather help Izzy with the Highland Games. Show her how to dance like a Highlander. Drink like a Highlander. And maybe, just maybe, fall in love with a Highlander. But when the games are over, where do they go from here?

Isabel Buchanan accepted her mother’s eccentricity many years ago.  In fact, these days, Isabel is rarely surprised by her mother, her wild ideas, antics and shenanigans.  However, bringing home a real, live Scotsman from her latest trip abroad has Isabel questioning her mother’s sanity.  Though the two seem all cuddly and cozy (EW!) Isabel is mistrustful and worried about the Scot’s motives.  To make matters even worse (REALLY?) the Scot seems to have a delectable friend, Alasdair Blackmoor, who’s also in town, looking and acting rather suspicious.

Since her father’s death, Isabel and her mother have done their level best to maintain their large state in Highland, Georgia.  A part of the estate’s legacy is the annual Highland Games and though it is a monumental undertaking, Isabel is determined to preserve the tradition.  According to her mother, with two real, authentic Scots in town and willing to help, this year’s games should be the best ever offered.  Though Isabel is a fan of authenticity and always strives to put on a good show, she isn’t quite ready to take the help being offered by two complete strangers with questionable motives.

Alasdair Blackmoor is somewhat befuddled by Highland, Georgia, Isabel Buchanan, a his “friend.”  In order of befuddlement: 1) Alasdair cannot fathom why his “friend” is hiding his true identity from the Buchanans, 2) Highland, Georgia really is what it advertises, a little piece of Scotland in the American South, 3) Why is Isabel so mistrustful and suspicious?  As if things weren’t complicated enough, Alasdair has agreed to go along with his “friend’s” misrepresentation of himself and to do a little digging of his own. Surely, Isabel and her mother are out for something and cannot possibly have any good intentions.  Trouble is, once Alasdair starts digging, he inadvertently digs a big hole that threatens to take away everything the Buchanan’s know and love.

As the days leading up to the Highland (Georgia) Games draws nearer, Isabel’s mother and her beau are in their own little happy bubble and rarely come out for air.  Isabel is consumed with Games details and with her mother out of commission, so to speak, Isabel has no choice but to accept Alasdair’s help.  As is happens, Alasdair is not only a willing volunteer, but a generally nice guy.  Though she certainly didn’t intend to like (or trust!) Alasdair, his actions and his words indicate his good intentions and he’s fun to be with.  Additionally, he’s dead sexy and has Isabel thinking seriously about the possibility of little fling with a hot Scot.  Unfortunately, great sex isn’t enough to make up for all the deception and when the truth about everyone finally crawls out of the darkness, Isabel is certain she should have hung on to the feeling is mistrust.

The Bottom Line:  What a fun little rom-com!  Nearly every relationship in this book is based on a misrepresentation and that certainly makes for some interesting encounters, conversations, and situations.  Perhaps the best part of all the misrepresenting is the fact that everyone started out with good intentions or as a way to help someone else.  When it all blows up, it is a rather spectacular explosion that eventually gets worked out and leads to not one, but two HEAs.  Both Isabel and Alasdair are immensely likeable characters whose dance of distrust is highly entertaining and often funny.  Bound up with their trust issues are some serious feels and a boat load of lust; of course, all this mixed together makes for an excellent relationship and wonderfully funny read.  Finally, Trentham has clearly set this up as the first book in a series and I will be glad to revisit Highland, Georgia in the next installment.

“I brought home a surprise!” Rose Buchanan threw her arms out wide as if embracing the world. From the sto- ries she told to the way she entered the room, Rose was exuberant and entertaining and enjoyed being the center of attention.

Isabel Buchanan, who was perfectly content on the fringes, pushed her wavy hair off her sticky forehead with hands that trembled from the nightmare drive through At- lanta to the airport to pick up her mom. Her mom’s trip to Scotland had doubled as both research and vacation. The jammed stop-and-go traffic had left Izzy flustered and al- ready dreading their exit from the airport.

Rolling her stiff shoulders, Izzy stepped around the bumper of the car, popping the trunk open on the way. Her mom had a beautiful plaid scarf of greens and browns and blues tossed over her shoulder and what appeared to be new earrings. Either purchase might inspire her mother to gush, and she would expect reciprocal gushing from Izzy. Making an educated guess, Izzy asked, “Are those ear-rings your surprise?”

Without waiting for an answer, she hauled one of her mom’s giant wheeled suitcases closer and prepared to heave it into the back. The sooner they got out of Atlanta, the sooner she could get back to work planning the High- land festival. Or she might pour an extra-large glass of wine and escape into a book. A guilty pleasure, consider- ing how much she still had to get in order in three scant weeks.

“Allow me, please.” A bearded man who had been roll- ing cases to the curb stepped forward with a grin and an accent Izzy couldn’t place.

She checked her pockets and winced. No cash to tip the man, and no hope her mom had thought of something so inconsequential.

“Do you like them? They’re hammered silver.” Her mom flipped her bobbed matching silver hair to the side and displayed one earring with her fingers. “And as a matter of fact, I did buy them from a lovely shop in Edin- burgh, but I brought something bigger home. Something more exciting.”

“Your scarf? It’s lovely.” Izzy gave her mom limited attention while she watched the man load suitcase after suitcase into her trunk, fitting them together like a puzzle. More luggage than her mom had left with. She waved to catch the man’s attention. “Hang on. That’s not all my mom’s stuff.”

For the first time, Izzy really looked at the man. He was close to her mom in age, and good-looking in a bear- like way with a gleaming white smile highlighted by a salt-and-pepper beard. His full head of hair was a shade darker, but graying heavily at the temples. The expres- sion on the man’s face when he looked in her mom’s direction—a mix of adoration and amusement—cleared the fog of confusion.

Lord have mercy, her mother had brought back a six- foot, two-hundred-pound-plus souvenir from Scotland.

From A Highlander Walks into a Bar. Copyright © 2019 by Laura Trentham and reprinted with permission from St. Martin’s Paperbacks.

Laura Trentham is an award-winning author of contemporary and historical romance, including Then He Kissed Me and The Military Wife. She is a member of RWA, and has been a finalist multiple times in the Golden Heart competition. A chemical engineer by training and a lover of books by nature, she lives in South Carolina.

← RoloPoloBookBlog is on vacation!!
Excerpt: The Escape Room by Megan Goldin →