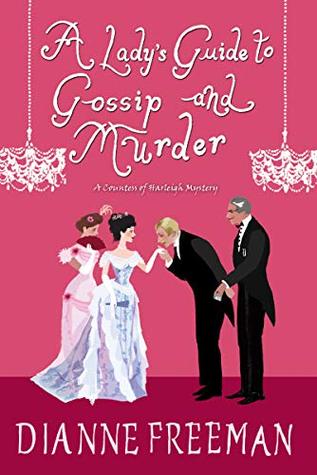 Though American by birth, Frances Wynn, the now-widowed Countess of Harleigh, has adapted admirably to the quirks and traditions of the British aristocracy. On August twelfth each year, otherwise known as the Glorious Twelfth, most members of the upper class retire to their country estates for grouse-shooting season. Frances has little interest in hunting—for birds or a second husband—and is expecting to spend a quiet few months in London with her almost-engaged sister, Lily, until the throng returns.

Instead, she’s immersed in a shocking mystery when a friend, Mary Archer, is found murdered. Frances had hoped Mary might make a suitable bride for her cousin, Charles, but their courtship recently fizzled out. Unfortunately, this puts Charles in the spotlight—along with dozens of others. It seems Mary had countless notes hidden in her home, detailing the private indiscretions of society’s elite. Frances can hardly believe that the genteel and genial Mary was a blackmailer, yet why else would she horde such juicy tidbits?

Aided by her gallant friend and neighbor, George Hazelton, Frances begins assisting the police in this highly sensitive case, learning more about her peers than she ever wished to know. Too many suspects may be worse than none at all—but even more worrying is that the number of victims is increasing too. And unless Frances takes care, she’ll soon find herself among them . . .

There are few things I like better in my books than a character, male or female, living his/her life totally outside the standards and norms of the time and place.  In round two of the Countess of Harleigh Mystery series, Frances Wynn is once again living her life outside of society’s bounds and boundaries in order to reveal a murderer and clear her hapless cousin’s name.

With much of London society retired to the country for the remainder of the summer, Frances thought it would be a quiet time in the city among her set.  Unfortunately, one devious and ruthless murderer has other plans entirely and when Frances’s friend, Mary Archer is brutally murdered, Frances sees her quiet end to summer come to an abrupt end.  As if dealing with the loss of her friend and preparing for a funeral weren’t enough, Frances has also been notified her cousin is a solid suspect.  Knowing her cousin as she does, Frances is certain he did not kill her friend.  Trouble is, if her cousin didn’t commit the crime, who did?

With a mystery on her hands and more than a little motivation to solve the crime, Frances plunges in with both feet.  As before, by her side and aiding in her investigation is her neighbor and romantic interest, Mr. George Hazelton.  Unlike Frances, George has been called into the investigation in an official capacity and he promptly reads in Frances in order to enlist her help.  What George turns over to Frances is a pile of notes and half-written bits and bobs concerning the darker side of much of London society.  Though most of the notes are easy enough to translate there are a few that are truly confounding.  What’s more, neither Frances nor George can explain why the quiet and unassuming Mary Archer was in possession of such intimate and potentially damaging information.  If they can just understand Mary’s motivation for having such information, they’ll most certainly understand the motivation for killing her and the person responsible for her untimely and grisly death.

The Bottom Line: I am quite involved with this series and we’re only on book two!  I simply adore Frances Wynn, her family, and her discerning, logical, and quick mind.  Frances is most certainly defying the standards of her station and living her life as she sees fit and I love her for that unconventionality.  I am also completely in love with Mr. George Hazelton: Hazelton is kind, intelligent, respectful, and caring of Frances.  When Frances and George work together, it’s a special kind of magic I sincerely hope will continue in the later installments of the series.  Finally, I am quite enjoying the uniqueness of the challenges in this series; Frances and George aren’t dealing with average run of the mill crimes, but with fun and interesting crimes that involve all levels of society and often call into play the rules and regulations of proper English society.  In short, I enjoy every aspect of this series and look forward to more crime solving from the most unconventional Countess of Harleigh!

← Mini-Review: A Summer Escape and Strawberry Cake at the Cosy Kettle (Book #2: Cosy Kettle Series) by Liz Eeles
RoloPoloBookBlog is on vacation!! →