Posted on July 1, 2019 by rolopolobookblog 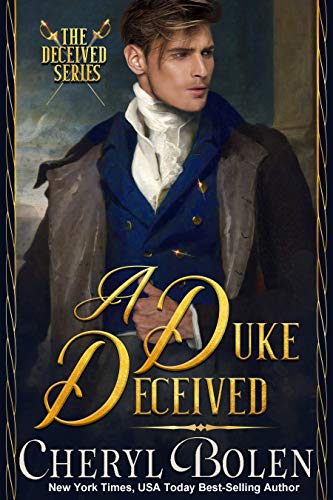 The unexpected and overwhelming proposal of marriage by Richard Moncrief, the Duke of Radcliff, was a dream come true to dowryless Bonny Barbara Allan — and her worst nightmare. For her reticent husband spoke endlessly of her beauty, yet never of his love. And her clandestine visits to help her cousin weren’t easing matters at all …  His obsession with the fair Bonny Barbara Allan was ruining the duke of Radcliff’s heretofore orderly life. But how could he trust his new bride — and vow his undying love — when she was secretly meeting another man?

At 34 years old, Richard Moncrief has never given much thought to the long term.  As the Duke of Radcliff, his fortune was made and set long ago which has left him with time on his hands, money to burn, and a group of rowdy friends only interested in the pleasures life has to offer.  In the blink of an eye, the life Richard Moncrief has so wholeheartedly and unabashedly lived comes into question the night he meets Bonny Barbara Allan.  To his friends’ great surprise, Richard’s days of drunkenness and debauchery have come to an end as he sets his sights on marriage, family, and forever.

Bonnie Barbara Allan is beautiful, intelligent, kind, loyal, and from a titled family, but she has no money for a dowry and very little hope of making a love match.  What wears on Barbara the most is not so much the idea of a loveless marriage, but the idea that some man will ask for her hand simply because of her beauty, that is, failing to see beyond the façade to her true character.  When Richard Moncrief approaches Barbara she assumes it is because of her looks, but when he steps in to help her with her dying mother, Barbara hopes the Duke of Radcliff is a man capable of looking beneath the surface.

Overcome with desire and a deep sense of need to see Barbara happy, Richard proposes to and marries Barbara within weeks of meeting her.  Both are deliriously happy with their marriage, but both also harbor secret concerns.  Barbara is certain (without asking!) that Richard cannot possibly love her and only wants her for her beauty while Richard is certain (without asking!) that Barbara cannot possibly love him because her heart belongs to another.  Though the first days and even weeks of their marriage are happy, events, people, and their own unfounded concerns conspire against the new couple and will stop at nothing to tear them apart.

As the weeks drag by, Barbara does her best to hide her fears and concerns and learn to fit into the esteemed role she has married into.  She desperately loves Richard but simply cannot understand his erratic and often insensitive behavior.  For Richard’s part, he his convinced his wife truly belongs to another and rather than asking questions and doing his own investigating, Richard reverts to his bachelor lifestyle hoping to shame or guilt his wife into changing her ways, missing, and loving him. Of course, life has a way of forcing the truth to come out and when it does, all hell breaks loose, hearts are broken, and some fences are never again going to be mended.

The Bottom Line: I’ve said it so many times before regarding Cheryl Bolen’s books and I’m saying it again, every book is like revisiting old friends.  I fall into these books, these worlds, and these characters and simply don’t want to come out until the very last page.  From the moment I met her, I liked Barbara and wanted nothing more than for her to be happy and fulfilled in her life.  I very much liked Richard as well, even in his moments of prideful stupidity.  What I liked more than anything else?  Richard and Barbara together and married from early moments in the book.  I liked knowing there was no way out of the marriage for either and all the angst and worry and frustration at their shared, though unrevealed, fears were going to be resolved and they would live happily ever after.  The machinations of others to tear apart Barbara and Richard very nearly work, and I loved every minute of the drama, in all its time period appropriate politeness and propriety. I can’t imagine there will ever be a time when I won’t so enthusiastically adore on of Cheryl Bolen’s period pieces.  I find them to be well-written, entertaining, authentic, and simply enjoyable.

One Comment on “Re-Release Day Review: A Duke Deceived (Book #1: The Deceived Series) by Cheryl Bolen”