Mini-Review: The Wisdom of Sally Red Shoes by Ruth Hogan

Posted on June 3, 2019 by rolopolobookblog 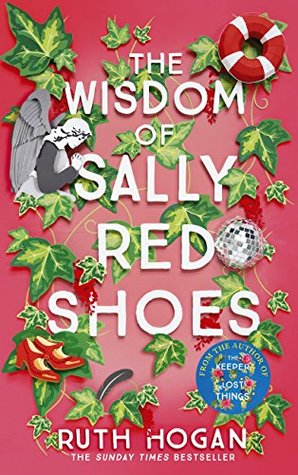 Masha is drowning. Once a spirited, independent woman with a rebellious streak, her life has been forever changed by a tragic event twelve years ago. Unable to let go of her grief, she finds solace in the silent company of the souls of her local Victorian cemetery and at the town’s lido, where she seeks refuge underwater – safe from the noise and the pain.

But a chance encounter with two extraordinary women – the fabulous and wise Kitty Muriel, a convent girl-turned-magician’s wife-turned-seventy-something-roller-disco-fanatic, and the mysterious Sally Red Shoes, a bag lady with a prodigious voice – opens up a new world of possibilities, and the chance to start living again.

Until the fateful day when the past comes roaring back…

The Bottom Line: I spent roughly the first 30% of this book having no idea where it was going and not caring one bit!!  From the moment this book opens you are drawn into Masha’s story, her pain, and her struggle to move beyond the loss of her beloved son.  That movement is aided significantly by Masha’s own realization about the effect her grief is having on her family and friends, a conscious decision to make changes and move forward, and the friendships she develops with Kitty Muriel and Sally Red Shoes.  As the friendships develop, Masha learns to see life as a thing worth living and not a thing to regret and feel guilty over.  In fact, as Masha draws closer to both Sally and Kitty Muriel, she finds deep wisdom and valuable life lessons can be learned from the older woman, lessons that help push Masha beyond her grief and toward a better and happier life.

Beyond the friendships, which are utterly fascinating, I also very much enjoyed Masha’s trips to the cemetery.  While this may sound decidedly morbid, Masha’s trips are actually full of imagination and joy.  Though she is dealing with her own loss and pain, Masha has turned the cemetery into a place that celebrates life and imagines, quite literally, the lives of the people who now occupy many of the graves.  To deal with her own issues, Masha has created a rich and wonderful world populated by the dead or, as Masha calls them, her family on the other side.  I quite enjoyed these trips to the cemetery as much as Masha’s beast of a dog 😊

In truth, I absolutely requested this book based on the title alone!  How do you refuse and/or ignore a title like The Wisdom of Sally Red Shoes?  What I got was a wonderful story, a deep and rich world populated by wonderfully unique characters and a twist that left me reeling.  This one is an absolute top recommendation!

← Mini-Review: The Daughters of Temperance Hobbs by Katherine Howe
Mini-Review: A Slice of Magic by A.G. Mayes →