Review: The Memory of You (Book #1: Sanctuary Sound Series) by Jamie Beck 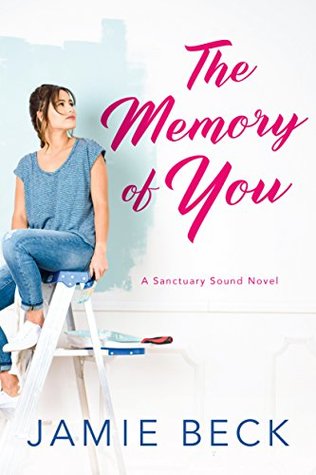 Steffi Lockwood has survived more than most. Recovering from an assault, she returns to her coastal Connecticut hometown to rebuild her life the best way she knows how: with her hands. But starting a remodeling business with one longtime friend puts her in the middle of a rift with another. Worse, being hired by her ex-boyfriend’s mother forces her to confront old regrets.

Public defender Ryan Quinn wasn’t shocked when his wife left him, but he was floored when she abandoned their daughter. With his finances up in the air, the newly single dad returns to his childhood home in Sanctuary Sound. The last person he expects, or wants, to see working on his family house is Steffi Lockwood—his first love who shattered his heart.

Although Steffi and Ryan are different people now, dormant feelings rekindle. But when Steffi’s secrets begins to surface, will it bring them together…or tear them apart for good?

Ryan Quinn never saw himself living life as a single dad or caught in the middle of contentious divorce following his wife’s affair and abandonment of their daughter.  With nothing left to do but go home, Ryan and Emmy return to Ryan’s hometown of Sanctuary Sound, move in with his folks, and attempt to build a life neither ever expected to be living.  With a new job, a sullen child, and a precarious financial situation, the last thing Ryan Quinn needs is one more problem.

Like Ryan Quinn, Steffi Lockwood was born and raised in Sanctuary Sound.  Also, like Ryan Quinn, Steffi Lockwood has also had her life turned upside down and since moved home to begin rebuilding her life.  In the spirit of rebuilding, Steffi has opened a remodeling and redecorating business with her best friend, Claire.  With a budding business, Steffi can’t afford to turn down work and that means working on Ryan Quinn’s family home.  While that sounds like a dream job – and it certainly is for the business – Steffi is all kinds of worried given how she left things with Ryan more than a decade ago.  For Ryan, Steffi’s presence is a crazy-maker that brings back a great number of memories and emotions he’d rather ignore for the time being . . . . or forever.

Ten years ago, Ryan was happily in love with Steffi Lockwood and planning their future together.  That is, until Steffi ghosted him and left him a wretched mess hellbent on making bad choices.  As far as bad choices go, Ryan knocked up a girl he wasn’t completely committed to and spent the next ten years in an unfulfilling and ultimately unsuccessful marriage.  The only good thing to come out of the decade is Emmy, Ryan’s delightfully feisty daughter.  While he isn’t at all interested and in having a relationship Steffi, Emmy sure seems to like her and if it eases Emmy’s transition, Ryan will just have to suck it up and try to be civil.

As the days and weeks go by, Ryan and Steffi keep getting thrown together through a series of circumstances and with each new encounter Ryan’s feelings seem to become a bit less frosty.  What’s more, when Ryan actually takes a moment to speak to Steffi, he finds his understanding of their past isn’t quite what he has always thought it to be and that changes his feelings evea586n further.  In 9n+

In fact, each new encounter has Ryan wanting to spend more time with Steffi and get to know her now rather than as he remembers her from 10 years ago.  For Steffi’s part, spending time with Ryan is a dream come true and after her treatment of him 10 years ago, is something she never thought possible.  The only hitch in Ryan and Steffi’s new arrangement is the troubling blackouts Steffi keeps having.  When one of the blackouts jeopardizes Emmy’s safety, Ryan steps in and opens a can of worms no one saw coming or could have ever prepared for.

The Bottom Line:  What a great start to a new series!  I think what I liked most about this read is how long the big reveal was put off and how it was dealt with once the reveal was made.  The big reveal is a sad and serious situation that, unfortunately impacts the lives of far too many women every day around the world.  The big take away from Steffi’s situation is the importance of family, friends, and a support system designed to help rather than humiliate and/or discredit victims.  At every turn, Steffi had the help and support she needed even in the moments she refused that help and support.  Outside of Steffi’ situation is Ryan and Emmy’s which not only includes Steffi, but a pathetic and selfish mother and ex-wife with no regard for the hurt she has caused and continues to cause.  Finally, there is the addition of Steffi’s best friend, Claire and the situation she brings to the table.  In all, this is a complicated and layered read that deals with serious situations in both an appropriate and sympathetic manner.  As far as a first in a series book goes, this one avoids many of the pitfalls and sets the reader up nicely for the second book, The Promise of Us.

← Excerpt and Sweepstakes: Finding Your Way by Amy K. McClung
Mini-Review: The Promise of Us (Book #2: Sanctuary Sound Series) by Jamie Beck →

#tinyhuman bought a hat at Cirque du Soilel the other night. I wondered what in hell she would do with it. Question answered 😒
Follow rolopolobookblog on WordPress.com