Posted on May 6, 2019 by rolopolobookblog 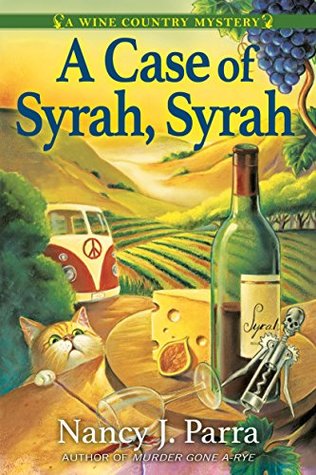 Taylor O’Brian is a new businesswoman, founder of “Taylor’s Off The Beaten Path Wine Tours,” who lives on a small winery with her Aunt Jemma. She plans to take small groups around romantic Sonoma county to discover some of the county’s outdoor gardens. It’s all running as smooth as can be until Laura, the leader of the group of yoga instructors she’s leading, is found dead. And it’s Taylor’s corkscrew that’s found buried in Laura’s neck.

She’s not sure who to trust, and everyone around suddenly seems suspect. Only two weeks after the murder, her very own administrative assistant, Amy, marries Laura’s husband, Dan, who doesn’t seem very bereaved about being widowed, and the three yoga masters who were also out on the tour begin to seem shady. Taylor can’t afford to jump ship from her new business endeavor, but just as she begins her investigation, another dead body surfaces. This time, it’s Dan’s sister. And the killer is coming for Taylor next.

Now it’s up to Taylor to uncork this open-bottle mystery, before more blood is spilled. For fans of Laura Childs and Ellen Crosby, A Case of Syrah, Syrah is the charming first in bestselling author Nancy J. Parra’s Wine Country mysteries.

The Bottom Line: When Taylor O’Brian came home to help her “ailing” Aunt Jemma, she never thought she would stay, let alone launch a new business.  Deep in the heart of wine country, Taylor plans to shuttle tourists around to the area’s best kept secrets and, of course, enjoy a bit of wine along the way.  Unfortunately, Taylor’s first tour is marred by tragedy and lands herself in jail and accused of murder!  For the remainder of the book, Taylor spends her time ignoring her lawyer’s advice and snooping around in order to clear her name.  While I appreciate the initiative taken by Taylor to clear her name, I often found her lack of listening to her lawyer tiresome.  What’s more, though I liked Taylor while reading the book, I found she faded rather quickly once I finished the book which suggests to me, Taylor needs to be a bit more fully developed to be a more memorable character.  With that being said, everything else worked for me in this book including the plot, the other characters, and the especially the setting.