Review: Once Upon a Bad Boy (Book #3: Sometimes in Love Series) by Melonie Johnson

Posted on May 2, 2019 by rolopolobookblog 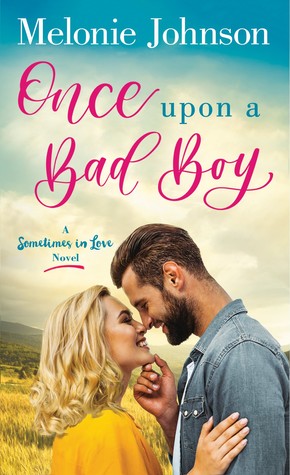 NEVER SAY NEVER
Sadie Gold is ready to take her career to the next level with the role of a lifetime. Finally, she can shake her reputation as a pretty face with more wealth and connections than talent. But Sadie is not prepared for the wild turn her own life is about to take. The man in charge of training Sadie for her most demanding role yet is none other than her first real boyfriend—the one who took her heart and ran away.

WHEN IT COMES TO LOVE
Bo Ibarra is as good-looking and irresistible as ever. Maybe even more so, now that everything once worked against them—Sadie’s pampered and privileged upbringing and Bo’s childhood in a family struggling to make ends meet—is in the past. But the future is still unwritten…and getting there, together, means coming clean about painful secrets and slashing through nasty tabloid rumors while trying to control the attraction that crackles between them. Maybe it’s finally time for them to walk off into the sunset and into a true and lasting love?

Though Sadie Gold won’t admit it to her friends, she still hasn’t gotten over her first true love, the man who shattered her heart more than 10 years ago.  To be fair, Sadie will barely admit the truth to herself, but the universe has plans for Sadie and admitting the truth is absolutely one of those plans 😊

For the last 10 years, Sadie has focused all her attention on improving herself as an actress and convincing people she is serious about her craft.  Sadie is tired of the public’s assumption that she is just a spoiled little rich girl whose parents bought her career and she’s looking to correct that misconception in a big way.  Oh, make no mistake, Sadie is rich, but she isn’t spoiled, and she’s worked her butt off to earn every role she’s gotten.  In fact, it’s her latest role in a huge action movie that Sadie hopes will earn her the respect she has worked so hard for.  She’s trained, she prepared, and with filming about to commence, there’s nothing that can derail her!

Bo Ibarra has spent the last 10 years doing two things: 1) building his career as a stuntman and; 2) regretting his decision to walk away from Sadie Gold.  Not once in 10 years have their paths crossed, until now.  With Sadie’s new movie set in Chicago and filled with stunts, Bo and his company are perfectly placed to coordinate the stunts.  Though Bo was expecting to see Sadie the first day of filming, Sadie wasn’t expecting him.  While Bo had hoped the reunion would be good, Sadie is clearly taken aback and somewhat frosty.  If his plans to win her back are going to work, Bo is going to have to make amends and prove to the woman he still loves that he can be trusted with her heart.

As the days on set begin to unfold, Sadie finds all her old feelings for Bo rising to the surface.  She’s done a damn fine job of keeping those feelings locked away and unacknowledged for 10 years but being face to face with Bo regularly is wobbling her resolve.   Bo is everything she has ever wanted and more, but he walked away from her once and the heartbreak nearly killed her.  She has to trust him on set with her body (the stunts, you pervert!) but trusting him with her heart is harder to do.  With each encounter, Sadie allows herself to remember more about her past with Bo and to bravely confront him about his actions.  Thanks to age, wisdom, and experience, both Bo and Sadie are better able to comprehend and accept that the past is the past and if they truly want a future with one another, the past is going to have to remain just that, the past. Unfortunately, not everyone in their lives is happy with the situation and with one bombshell, Bo and Sadie are blown apart once again.

The Bottom Line:  I know I said this yesterday about book two, but here goes . . . . I liked this book even better than the one before it 😊  Sadie and Bo are by far my favorite series couple and it has everything to do with their shared past (aaaw, second chance romance!) and they’re deliciously naughty, naughty bits!!  I love past meets present books and this book certainly satisfied that love.  Furthermore, I feel like Sadie and Bo, probably because of their shared past, are the most mature couple of the series to date and that very much appealed to me.  I am so glad I stumbled across this series and can’t wait to see what the author has in store for the last two friends in this crazy group of awesome girls!