Posted on April 8, 2019 by rolopolobookblog 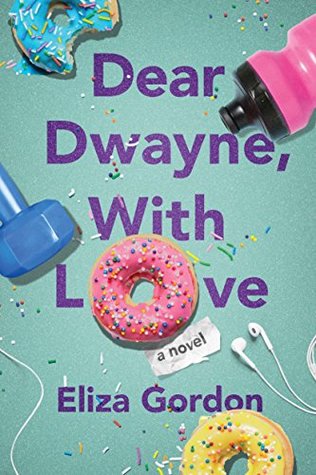 Wannabe actress Dani Steele’s résumé resembles a cautionary tale on how not to be famous. She’s pushing thirty and stuck in a dead-end insurance job, and her relationship status is holding at uncommitted. With unbearably perfect sisters and a mother who won’t let her forget it, Dani has two go-tos for consolation: maple scones and a blog in which she pours her heart out to her celebrity idol. He’s the man her father never was, no boyfriend will ever be—and not so impossible a dream as one might think. When Dani learns that he’s planning a fund-raising event where the winning amateur athlete gets a walk-on in his new film, she decides to trade pastries and self-doubt for running shoes and a sexy British trainer with adorable knees.

But when Dani’s plot takes an unexpected twist, she realizes that her happy ending might have to be improvised—and that proving herself to her idol isn’t half as important as proving something to herself.

Very late one night last week I decided I needed a break from all the heavy, emotional roller coaster books I had been reading.  I landed on Eliza Gordon’s Dear Dwayne, With Love and was thoroughly entertained from start to finish!  In fact, it was exactly what I was looking for and I’m sort of mad at myself for not reading this little gem far sooner than I did ☹

In a nutshell, Dani Steele is not at all satisfied with her life.  Her two sisters are ridiculously successful, her mother is a complete nutter, her boyfriend is just a step above a cave man, her job pays the bills and that’s about it, and her acting career is going nowhere.  Though Dani appears happy on the surface, she pours out her true feelings into her journal/diary which she has, since the age of 12 written in the form of letters to her hero, Dwayne “The Rock” Johnson.  Through thick and thin, The Rock has been there for Dani, “hearing” all her woes, “listening” to all her hope and dreams, and “sympathizing with” her issues and feelings about the people and events in her life.

While Dani accepts she will only ever admire The Rock from afar, Fate has other plans for her life and with the proper alignment of the stars, Dani comes across an opportunity that would allow her to meet her hero.  All she must do is compete in an obstacle course competition and win her age group!  Um, what??  Excuse me??  Yeah, Dani has never run a day in her life so winning this thing is going to take some serious commitment and the help of one miraculously beautiful trainer, Marco.  With absolutely no idea what she’s really getting herself into, Dani signs up for the event, contracts with Marco for personal training, and launches herself into a series of weeks and months that will test her both physically and emotionally.

Though Marco is miraculously beautiful, he is also a slave driver when it comes to fitness.  In addition to the physical workouts, Marco also instructs Dani to radically alter her eating habits.  What. The. Actual. Hell.  No more fun pastries with her work friends, no more pizza, no more fast food, just smoothies and vegetables, and smoothies, and infused water, and smoothies!!  The struggle is real and while Dani has chosen not to share her fitness journey with her friends, she has chosen to share it, and all the other annoyances in her life with The Rock in her diary, a tome she never, ever, in the history ever expected anyone other than herself to read.

In the blink of an eye, all Dani’s most intimate thoughts, feelings, and raw emotions are made public and everyone in her life, everyone, is made privy to her diary!  To make matters worse, every time someone opens the email and link, it is sent to everyone in their contact list.  Yeah, Dani’s life has gone viral and pretty much everyone, with no middle ground either loves or hates her.  Without doubt, everyone she is closest to falls firmly into the “hates her” category.  With no friends or family to turn to, Dani commits herself even more firmly to her fitness goals and earning the right to meet The Rock, the only person on earth who will sympathize with her plight 😊

The Bottom Line: I should have known, given how much I enjoyed Must Love Otters, that I would love this book too!  My favorite part of this book, without doubt is all the conversation.  I am such a fan of dialogue and this book is filled with witty, sarcastic, funny dialogue that comes in all shapes and sizes.  For example, Dani not only communicates with others in real life, but also has her written diary which is written in a letter format, and her inner monologue which is often a two-sided conversation with The Rock.  All the conversation not only moves the book along but reveals what we are really meant to see, learn, and know, that is, how Dani evolves as a human and how she navigates all the events, both good and bad, that happen in her life.  Though this is a very funny read, it is also the story of a human being who is essentially a good person, but, like all human beings, still has things to learn in this life.

P.S. I also bought the audio version of this book and sincerely hope the real voice given to Dani is just as good as the voice she spoke with in my head 😊