Posted on February 6, 2019 by rolopolobookblog 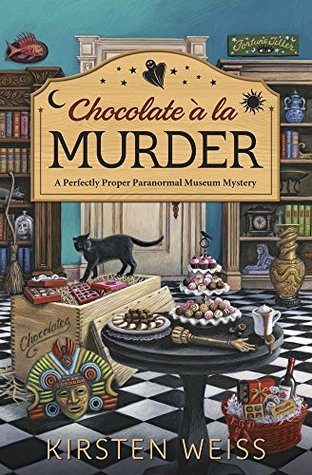 It’s Wine and Chocolate Days in San Benedetto, and paranormal museum owner Maddie Kosloski has sweet dreams about her new Magic of Chocolate exhibit. Her latest attraction is a haunted Mexican whisk called a molinillo that rattles if someone lies. When Maddie visits the town’s new boutique chocolate shop, she finds one of the owners dead and covered in melted cocoa.  Maddie’s determined to catch the killer, and she soon uncovers deadly dealings in the world of artisan chocolate. But the deception surrounding those dealings are enough to make the molinillo rattle all night. Will Maddie have to temper her passion for sleuthing before a killer makes her fate a bittersweet one?

Dear Lord!  One would think Maddie Kosloski lives in a sprawling urban center filled to the brim with mischief and mayhem rather than the sleepy little town of San Benedetto.  The woman can’t even go to the chocolate shop without tripping over a dead body!

Much to the great displeasure of literally everyone in her life, Maddie has found yet another dead body and this time it is one of San Benedetto’s beloved chocolate makers.  The death itself is bad enough, but it’s made even worse by the fact the town is knee-deep in one of its biggest annual events, Wine and Chocolate Days.  Even Maddie’s paranormal museum has gotten in on the action with a Magic of Chocolate display featuring a haunted molinillo.  Though she knows nothing about the murder and little more about the molinillo, Maddie intends to find out everything she can about both.

As Maddie begins poking around into the death of the chocolate maker, she finds misdeeds, irregularities, and lies that simply cannot be explained.  While the chocolate is delicious, nothing about the chocolate maker and his business make sense.  What’s more, with each new discovery, Maddie finds herself drawn deeper into a killer’s net.  Not only is her museum threatened, but so is her relationship with her cop boyfriend, and her life.  Maddie doesn’t want to stop digging, but she’s up to her neck in a mess and the killer is clearly willing to go to great lengths to protect his/her identity.

As if all this weren’t enough, Maddie also has her investigation into the history of the haunted molinillo, helping her bat-crap crazy friend Adele plan her ridiculous wedding, and her ex-boyfriend is stopping by the museum a lot and acting weird.  Needless to say, all the drama has Maddie on edge which is causing a great deal of strain with all her relationships.  If she can’t get to the bottom of all the messes and dilemmas, Maddie just lose everything.

The Bottom Line:  With each installment of this series, I think “San Benedetto can’t get any weirder!”  And yet, it does, and this is why I love this series so much.  Maddie is undoubtedly the center of this wonderfully weird universe and hovering around her is a cast of characters equally weird and delightful.  With each new book, all the core characters are showing growth while remaining true to their essence; this is one of the things I am most fond of in my books and it is a strong element in this series.  Of particular note in this book is the ending which I enjoyed tremendously because when the big bad and the motive is revealed, I remember thinking to myself, “WOW!  They even kill for weird reasons in this series.  AWESOME!!”  In all, the relationships are growing and expanding, the paranormal museum is picking up in terms of business, Maddie is getting far better at investigating, and the future of San Benedetto is poised for even more weirdness.