Posted on January 30, 2019 by rolopolobookblog 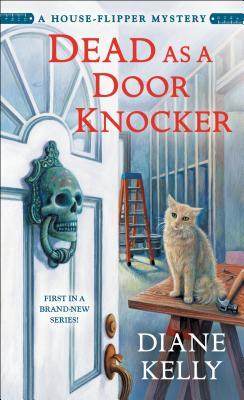 Meet Whitney Whitaker. A hopeless romantic when it comes to real estate, she knows what it takes to find–and flip–the home of one’s dreams. A fixer-upper is like catnip to Whitney: she can’t resist the challenge of turning an eyesore into a priceless work of art. So when one of her clients decides to liquidate a crumbling property, Whitney seizes the opportunity to purchase it for a song. But soon a curious incident of the cat in the night-time leads to a change in tune. . .

Sawdust is the name of Whitney’s cat–of course. Whitney’s passion for gut-renovation may be a mystery to him but one thing Sawdust knows for sure is this: Dead bodies don’t belong in flower beds. So why is there one in this new, albeit old, house? Now it’s up to Whitney, along with the help of hot-and-cold Nashville Police Detective Collin Flynn, to find the truth about what happened before the mortgage property forecloses and Whitney loses her investment. . .and maybe her own life.

Whitney Whitaker leads a charmed life!  She has a tiny, totally suited to her pool house she shares with her cat, Sawdust; she is on the verge of becoming a proper real estate agent, and she loves her jobs working as a property manager and skilled carpenter.  Just when she thinks her life can’t get any better, Whitney gets an offer she just can’t refuse.  With the help of her cousin, Whitney buys a gorgeous home for a song that she and her cousin can repair, upgrade, and flip for a healthy profit. Yeah, life is going along quite nicely for Whitney Whitaker.

Within 24 hours of buying the to-be-flipped house, Whitney and Sawdust find themselves in the middle of a fire and struggling to get out.  The very next morning, the fire investigator informs Whitney the fire started thanks to super-old wiring which absolutely cannot be true since her trusted inspector cleared the house in order for her to buy it.  As if all that weren’t enough, within the next week, the man Whitney bought the house from is found dead just out front in her flower bed.  Oh, and he was killed with one of her tools.  Yeah, life is suddenly not going quite as nicely for Whitney Whitaker.

Though Whitney is generally a cat kind of girl, her questions related to the fire and murder have turned her into a bit of a dog with a bone.  She and her cat’s life have been threatened, she’s been arrested and questioned, the house she’s trying to flip is costing her more money with every passing day, and she’s got no idea who’s trying to ruin her life.  What Whitney does have is a dogged determination to find the truth which leads her to asking questions, poking around where she shouldn’t be, and generally putting herself into harm’s way in order to clear her name and save her burgeoning career.  Unfortunately, there is one person out there who has a vested interest in Whitney not uncovering the truth and is willing to go to extraordinary lengths to ensure no one finds out the truth.

The Bottom Line: I was absolutely, totally and completely sold on this book by chapter two; chapter two is the first of Sawdust the cat’s chapters and I adore any book that gives an animal his/her own voice!  But I digress . . . .  overall, I found Whitney and her crazy life to be quite charming, her cat to be utterly adorable and necessary, and her family and friends to be integral to her success.  With that being said, all of those elements are going to need to be present in each book to recreate the same kind of magic that came together in this book.  In truth, I don’t think that’s going to be problem as the author has clearly struck on a combination that should keep the series going for a good long while.

← Excerpt and Sweepstakes: Always with You (Book #3: Indigo Trilogy) by Kate McBrien
Release Week Review: The Lost Girls of Paris by Pam Jenoff →