Posted on January 25, 2019 by rolopolobookblog 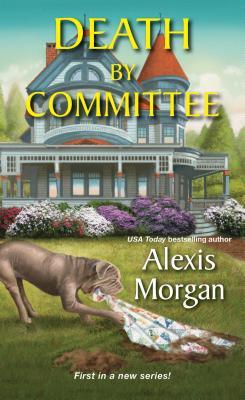 After a rough divorce, Abby McCree only wants to stitch up her life and move on. But other loose ends appear after her elderly Aunt Sybil passes away, leaving Abby to tend to a rundown estate, complete with a slobbery Mastiff of questionable pedigree and a sexy tenant who growls more than the dog. As Abby gets drawn into a tight-knit quilting guild, she makes a twisted discovery–Aunt Sybil’s only known rival is buried in her backyard!

Despite what local detectives say, Abby refuses to accept that her beloved aunt had anything to do with the murder. While navigating a busy social calendar and rediscovering the art of quilting, she launches an investigation of her own to clear Aunt Sybil’s name and catch the true culprit. The incriminating clues roll in, yet Abby can’t help but wonder–can she survive her new responsibilities in Snowberry Creek and still manage to patch together a killer’s deadly pattern without becoming the next victim?

Abbey McCree certainly doesn’t lack for support in the wake of the loss of her beloved aunt Sybil.  Abby has inherited her aunt’s beautiful yet sprawling home, a delightfully slobbery mastiff, a sexy yet surly tenant, a seat on nearly every committee in town, and a gaggle of blue-haired friends dead set on helping Abbey navigate her grief.

With a house full of boxes and closets and rooms to sort through and a yard in need of serious attention, Abby puts her nose to the grindstone and gets to work.  Trouble is, just as she’s starting to make some headway, Abbey and her surly (yet hot!) tenant make a grisly discovery, a body wrapped in a quilt buried in the back flower bed.  To make matters far worse, the woman buried among the brambles was the only woman in town known to openly dislike Abbey’s aunt Sybil.

Thankfully, the local cops aren’t completely clueless and don’t just go with the obvious, Aunt Sybil whacked the old bird before her own death, case closed!  Like the cops, Abbey isn’t at all accepting of the easy answer and she certainly isn’t going to let the town assume the worst of her aunt, a woman who spent her life giving selflessly to the town.  Though she’s no experienced investigator, Abbey is determined to clear her aunt’s good name.

As it happens, when Abbey’s aunt Sybil died, she left Abbey with a host of blue-haired friends who have lived in the same small town for decades.  Those old birds aren’t just supportive, energetic, and friendly, but they know every secret, every dirty deed, and every bit of gossip ever spread in town.  With the ladies’ help, Abbey has clues to begin her search and as she digs, the ladies help her with more answers and more questions.  Oh, and from time to time, they help with a ride along 😊  As Abbey gets closer to uncovering the truth, she discovers the mean old lady may not have been quite so mean, her aunt was definitely not responsible for her death, and there a load of missing quilts that break the case wide open.

The Bottom Line: First in a series books can be tricky, but I found this one to have avoided most of the pitfalls.  Though there is a great deal of background information, there isn’t so much that it overwhelms and/or bogs down the story.  What’s more, Abbey, the old birds, her awesome mastiff, and her surly yet hot tenant are all really good, solid characters I definitely want to know more about.  Based on all the information the old birds have stored in their collective brain, I would say Snowberry Creek is going to offer a whole host of mysteries just waiting for Abbey McCree to solve.