Posted on January 4, 2019 by rolopolobookblog 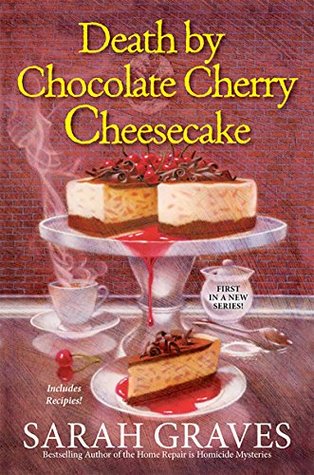 Jake and Ellie have been through a lot together, from home repair to homicide investigation. So when they decide to open a chocolate-themed bakery, they figure it’ll be a piece of cake. With Ellie’s old family recipes luring in customers, they expect to make plenty of dough this Fourth of July weekend. Having family home for the holiday only sweetens the deal for Jake—until the ill wind of an early-season hurricane blows up her plans. When the storm hits, Jake’s grown son Sam is stranded in a Boston bus station, and her husband Wade is stuck on a cargo ship. But as bitter as the storm is, something even more sinister is brewing in the kitchen of The Chocolate Moose—where health inspector Matt Muldoon is found murdered.

Ellie never made a secret of her distaste for Matt, who had been raining on their parade with bogus talk of health code violations. Now, with no alibi for the night of the murder, she’s in a sticky situation with the police—and it’s up to Jake to catch the real killer and keep Ellie living in the land of the free.

The Bottom Line: As far as I can tell (and I did a search!) this is my first Sarah Graves book and, in general, I liked the read.  Jake and Ellie are fine characters who have been fully and completely developed, are smart and dedicated women, with a tendency to become involved in investigations.  As I discovered as I listened along, Jake and Ellie have a history in another Sarah Graves’ series which gave them an entire background and back story I was not privy too.  While there were certain aspects of this read where that hindered me, by and large, you don’t have to have read the other series (Home Repair is Homicide) to enjoy the start of this one.  Aside from the backstory bit, there is A LOT going on in this first read and I think it fell into some of the pitfalls so common to first-in-a-series books.  For example, there are ALL the characters, a plot that became very involved and somewhat unnecessarily complex, and the opening and descriptions of a new business venture for Ellie and Jake.  My favorite part of this read, and what’s got me moving on to the second book, is the description of the new business and all the tasty treats that come out of the Chocolate Moose.  What’s more, I think, once this series settles in and I get a grip on all the permanent characters, I’m really going to enjoy the sleuthing and chocolating adventures of Jake and Ellie!