Posted on January 3, 2019 by rolopolobookblog 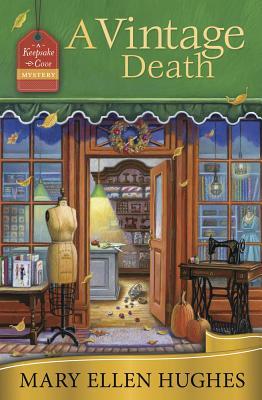 As the new music box store owner and resident of Keepsake Cove, a quaint town full of collectible shops on Maryland’s Eastern Shore, Callie Reed is eager to get more involved in her community. She volunteers to plan the Fall street decorations and welcome a visiting author who’s come for a special book signing. But the celebratory mood is cut short when the local B&B owner is found dead, killed by a pair of vintage scissors.

Suspicion is cast on the victim’s estranged wife, Dorothy, who owns Keepsake Cove’s vintage sewing shop. Callie is sure Dorothy is innocent, and the visiting author agrees. Together, they begin their own investigation, only to discover that many people in Keepsake Cove have secrets. Secrets that are worth killing to keep quiet.

Callie Reed has had quite the introduction to Keepsake Cove.  Following the murder of her beloved aunt, the taking over of the music box shop, and the adjustment to an entirely new life, Callie has resolved to become involved in her new community, really get to know her neighbors, and stay out of trouble.

In an effort to really dive right in and become a full-fledged member of the community, Callie has agreed to head up the planning committee for the town’s upcoming fall festival.  With decorations, activities and entertainment, refreshments, and advertising, Callie has her hands beyond full.  She certainly doesn’t need a distraction like one of her favorite neighbor’s and fellow shop owners being accused of murder, but that is exactly what Callie gets.

Though she doesn’t intend to become involved in the investigation, Callie is roped into the sleuthing by a most unlikely source, the visiting paranormal author in town to sign books during the Fall Festival.  As the two women begin their own investigation, they quickly uncover a hard truth, no one, not even the victim’s estranged wife liked the dead man.  What’s more, with only a bit of digging, Callie and company discover the victim wasn’t simply disliked but reviled for his attitude and abhorrent behavior.  If it weren’t for his sweet estranged wife being blatantly accused of his death, much of Keepsake Cove would likely consider his death a public service and move on with their own lives.

As so often happens, like attracts like and the wretched victim was in cahoots with several other shady characters.  Callie’s digging is making a lot of people nervous and before she knows it, she finds herself not only in the thick of it, but a very real target for the killer.  With each new incident (yes, there’s more than one!) Callie knows she is getting close to the truth, but the big reveal is more than she could have ever imagined and is as heartbreaking as it is diabolical and wrong.

The Bottom Line:  Even at only two books in, I am fully prepared to call the Keepsake Cove Mystery series one of my absolute favorite cozy mystery series!  I loved everything about this book from the plot, to the multitude of secrets, to the past coming back to impact the present, to the growing sense of acceptance, community, and friendship among the shop owners.  Though young, Callie is a kind and generous soul who fits in perfectly with the older community she now finds herself a part of.  Each character is so well developed that each unique personality shines through and draws the reader in.  Since I am such a character-driven reader, this quality very much appeals to me and keeps me connected to the story and people telling the story.  Finally, I love that the plot truly is cozy mystery; yes, there is death and back things, but there are no over the top crazy/awful descriptions and the twists and turns aren’t such that I get lost in the complexity.  In short, A Vintage Death is just a fine read that will absolutely appeal to a wide range of readers, but most especially cozy mystery lovers.