Posted on December 17, 2018 by rolopolobookblog 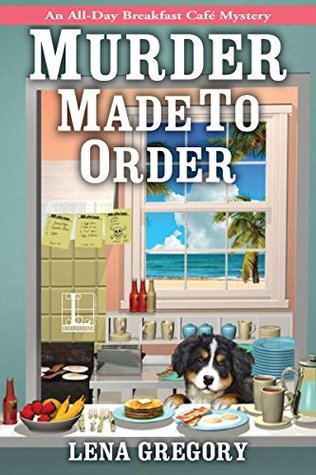 New York native Gia Morelli is just getting used to life in Florida when she gets word that the town government wants to shut down her pride and joy: the charming little diner known as the All-Day Breakfast Café. A forgotten zoning regulation means that the café was opened illegally, and hardboiled council president Marcia Steers refuses to budge. Gia is considering hanging up her apron and going back to New York, but before she gives up on her dream, she discovers something shocking in the local swamp: Marcia Steers, dead in the water. There’s a secret buried in the books at town hall, and someone killed to keep it hidden. To save her café and bring a killer to justice, Gia and her friends will have to figure out a killer’s recipe for murder . . .

Gia Morelli has just gotten past the death of her ex and all the drama he brought to her new door with his life and death.  Her All-Day Breakfast Café is gaining some ground and if she could only find a reliable cook, Gia could actually get out among her customers and really get to know her community.

As it happens, some among her community have no intention of Gia hanging around and if they have their way, her café is going to be closed with a single vote of the city council.  Though Gia has been struggling with her place in her new home and community, she’s proud of her café and there will be no closing without one hell of a fight.  Just as she builds up a head of steam and is ready to dive into the fray, Gia literally stumbles upon a dead council member and a whole new can of worms is opened.

With only the smallest bit of investigating, Gia and her best friend, Savannah discover the closing of Gia’s café isn’t just a contemporary issue but one that stretches back twenty years and involves the deaths of at least two other people, one of whom was Savannah’s mother.  This case has hot mess written all over it and the outcome will likely determine whether Gia stays in Florida or packs her bags and moves north to New York.

In short order, the awful piles up including a fire at Gia’s home, her quasi-boyfriend, Hunt being secretive, disappearing, and getting into fights and suspended from the force, and at least one potential stalker creeping out Gia and furry beast, Thor.  As if that weren’t all enough there are also ticks and snakes, a tornado, and a mysterious woman who roams the woods and spouts seemingly prophetic statements.  Florida isn’t making a great case for Gia to stay, but her café has become so important to her and she’s done with others dictating the course of her life.  With nothing left to do but come out swinging, Gia gets the investigation going and with a wing and prayer hopes she comes out safe and sound and with some answers on the other side.

The Bottom Line: Even without all the awesome descriptions of food (mmmm, breakfast) I was going to like this book.  The core group able and easy to root for.  In general, Gia is a quiet though friendly woman who of characters in this series are all immensely likekeeps getting pulled into drama not of her own making.  Though isn’t predisposed to investigating and sleuthing, Gia is determined and willing to fight for what she’s building her new home.  Savannah is feisty and sassy and always willing to step up and help her friend and community.  Hunt is tall, dark, and sexy and seemingly committed to making a go of things with Gia; I like Hunt quite a bit and wouldn’t mind seeing more of him in subsequent installments.  Finally, there’s Earl, Cole, and Harley.  While they aren’t huge characters by any stretch of the imagination, each has his own real impact on Gia and the community and would like to see each have a larger role in future reads.  The mystery is definitely cozy which I simply love, the heat level is low and totally appropriate for the characters and the story, and the sense of community is endearing and something I genuinely like in my books.