Posted on December 15, 2018 by rolopolobookblog 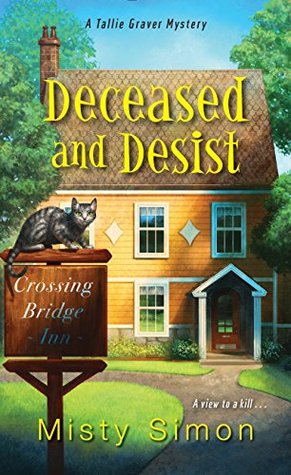 Most housecleaners don’t do windows, but Tallie Graver loves leaving a pane of glass streak-free and sparkling. After a dirty divorce from a filthy-rich jerk, she’s started her own cleaning business to make ends meet. On her latest job, prepping a renovated bed and breakfast for a grand re-opening, she’s standing outside on a ladder, wiping off a grimy pane, when she spies a man on a bed through the glass. But the B&B isn’t open for business yet—and the man’s not sleeping. Her family owns the Graver Funeral Home, so Tallie knows a corpse when she sees one.   The victim is a shady building inspector with a reputation for handing out passing grades for a greased palm. With the local police resistant, Tallie launches her own investigation, before she gets a rep as a town crank. But it’s going to take more than a squirt bottle and a squeegee to clean up this mess. With the help of her gal pal Gina, Tallie searches for a killer’s motive. But she’d better be careful, or it’ll be curtains for this window cleaner . . .

The Bottom Line: While I am still liking this series in general, there is the quite annoying issue of some of the regular characters still harping on Tallie about her involvement in the various crimes she has stumbled upon.  For myself, this is really becoming an issue and I sincerely feel it needs to change or I’m going to have to part ways with the series.  Yeah, it bothers me that much.  With that being said, there are still other aspects of this book and series I quite enjoy.  I do like Tallie, Max, Gina, and the furries so much and the plot of all three books have kept me guessing and totally interested.  I want to keep enjoying and reading this series, but I need to see some serious evolution in some of the other regular characters.  I suspect, the fourth book will be the one that decides my fate on this issue once and for all.