Posted on December 4, 2018 by rolopolobookblog 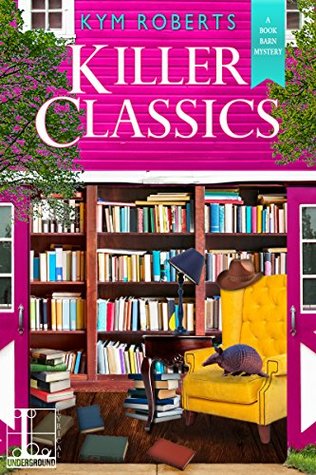 Charli takes great pride in running one of the few independent, family-owned bookstores in
small-town Texas. She vets everything carefully, with an eye to the eclectic tastes of the locals. That includes the Book Barn’s weekly book club selection. This time out it’s a mystery whose characters bear a striking resemblance to local citizens, including Charli’s friend Sugar . . . who’s the prime suspect when her real-life nemesis is found dead in a hotel’s water tank.

With help from her pet armadillo Princess, Charli campaigns to clear Sugar’s sweet name—literally—when the up-for-election mayor becomes a killer’s next target. Murder and politics make scandalous bedfellows as Charli discovers that fiction may be fatal, but reality could be just as deadly . . .

“They all knew I was responsible; who else could cause that much uproar in town?”

Truer words have never been spoken by Charli Rae Warren and in this installment of the Book Bark Mystery series, Charli Rae is up to her butt in trouble only she can cause.

One would think, based on her track record that Charli Rae is a professional trouble seeker.  While that is not the case, trouble always seems to find Charli Rae and once again, the trouble involves murder.  What’s more, the suspected killers are two of the kindest people in all of Hazel Rock, and with few exceptions, no one can believe they really committed the crime.  With only the right thing left to do, Charli Rae dives into the fray determined to clear her friends’ names.

When not solving crimes and generally causing trouble, Charli Rae is determined to see her relationship with the super sexy sheriff move forward.  Mateo is the only man Charli Rae has eyes for, but the stubborn man doesn’t quite understand her feelings.  Adding to the confusion is the near-constant presence of Charli Rae’s ex, Mayor Cade Calloway.   While Cade may be interested in Charli Rae, he has bigger fish to fry, larger life concerns, and he isn’t the type to make a move on another man’s woman.  Trouble is, Cade needs Charli Rae’s help and he isn’t quite ready to reveal the why of it to the general public.  As you might expect, this sort of subterfuge causes issue for Charlie Rae and Mateo.  Because, she needs one more problem in her life 😊

Simply because a grisly murder and man problems aren’t enough to deal with, Charli Rae also has a frisky armadillo on her hands.  Princess has always been a good girl, behaving herself, keeping herself clean, and providing loads of love and laughs for Charli Rae and her customers.  It seems, Princess has found herself a new boyfriend and most certainly isn’t an armadillo.  Though Charli Rae tries to convince Princess of the error of her ways, her feisty girl isn’t having any of it!  As far as Princess is concerned, everyone can either get good with her new man or get gone.  Ironically, because of her boyfriend’s identity most really do want to get gone 😊

The Bottom Line:  Killer Classics is chock a block full of all the things I have to come love in this series!  Charli Rae is once again up to her butt in trouble, Mateo is frequently found dismayed by Charli Rae and her antics, Princess is up to her brand of mischief making, there’s a murder to be solved, and the citizens of Hazel Rock whom I have come to know, and love make plenty of appearances.  I sincerely feel as if this series is getting stronger with each new book, as each character evolves, and the community becomes stronger after every trial and tribulation.  This series is such a great mix of mystery, light romance, humor, and friendship and it has kept me entertained from the very beginning.