Posted on November 30, 2018 by rolopolobookblog 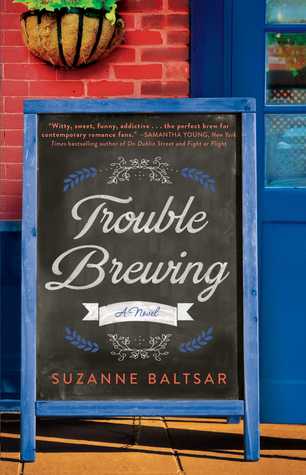 Piper Williams is used to being the only woman in a room full of men, but she isn’t used to being instantly drawn to someone she’s in business with.

After working long hours brewing in her garage, Piper is determined to prove herself—and to ignore the chemistry she has with Blake Reed, owner of Minnesota’s newest gastropub who is going to stock four of her brews. She wants her craft beer to stand on its own merits and knows that the tight-knit male-dominated brewer community will assume the worst if she starts anything with one of her vendors. No way she’ll risk everything she’s invested in her budding business on a guy who might not stick—no matter how charmingly handsome and funny he is, right?

And Blake has a conflict of his own—his haughty family wants him to ditch the gastropub and support his father’s political campaign. Well, that, and the fact that he knows Piper’s snark and sass is the perfect blend of crisp and refreshing for him. So Blake and Piper make a pact: she’ll go out with him if, and only if, two additional pubs start carrying her beer. Sticking to the pact proves harder than either of them expected—especially since the attraction is off the charts between quirky, independent Piper and smart, charming Blake.

Then Piper gets a once-in-a-lifetime offer that could launch her company to the next level—and take her away from Blake. Are she and Blake just drunk in love, or do they have something real that’s worth risking her dreams for?

One of my very favorite settings in all of bookdom is the pub/brewery/bar setting.  I have always found the setting to one that is ripe for mischief, merriment, and so much romance.  I got all of that and more in Suzanne Baltsar’s Trouble Brewing.

Piper Williams is living and working in a man’s world and she is reminded of that fact on a regular basis.  As a brewer, a female brewer, Piper’s road isn’t easy, but she is good at her job and determined to have her beer in every bar and pub in the area.  As luck would have it, Piper meets Blake Reed, the owner of the Public, Minnesota’s newest gastropub and he wants to stock his bar with Piper’s beer.  While Piper is thrilled her beer is finally going public, she’s afraid the other brewers in the close-knit community will see her success as a result of her looks and not her skills.  As if to confirm her suspicions, Piper’s old boss pulls aside after seeing her with Blake to warn her of the impression she’s leaving on the brewing community.

Blake Reed is the black sheep in his family.  He left his father’s law firm, he has no designs on running for political office, and he certainly isn’t a bigot.  What he is, is the proud owner of the Public, a shrewd businessman, and a big fan of Piper Williams and her craft beer.  In short order, Blake falls under the spell that is Piper Williams and all he wants, beyond their shared success is to be with Piper. Unfortunately, there are hurdles and obstacles to overcome in order to make that happen.

Like Blake, Piper is smitten, but she lives in fear of being outed as Blake’s girlfriend.  Even a hint of scandal, in Piper’s mind, is enough to ruin her career, but Blake seems to be worth the risk.  To be fair, many of their dates occur at the Public, and as the name implies, they’re surrounded by a crowd and often able to hide their romance.  It isn’t until Blake takes Piper home to meet his parents that everything goes to hell in a hand basket, some nasty truths come to light, and Piper is forced to make the biggest decision of her life.

The Bottom Line:  Quite frankly, I don’t completely understand the below four stars rating this book has on Goodreads.  I found Trouble Brewing to be a fun read with just the right level of drama, just the right level of romance/heat, and just the right level shenanigans.  Blake and Piper are both easily likeable characters, the setting is one of my favorites, and the plot is sufficiently interesting and engaging.  I quite enjoyed this read and found myself hoping there will be at least two more books to come.  Piper and Blake have friends with their own stories to tell, and I, for one, would be most excited to read those stories.