Review: Worth Fighting For by Susannah Turner

Posted on November 21, 2018 by rolopolobookblog 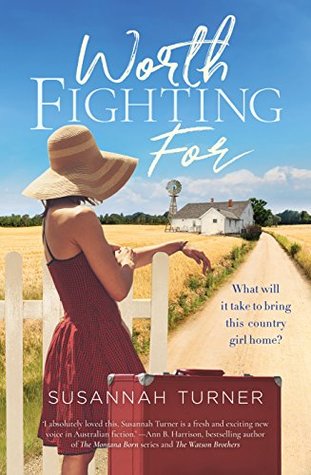 Everyone loves Charlotte Ahearn. She’s friendly, funny, smart and kind – and she’s a brilliant baker – so why has she moved to a country town where nobody wants to know her?

Dunbarton doesn’t seem to get that Charlotte is just there doing her job – convincing the town that the local silver mine should be allowed to expand. If only a certain local farmer called Nick MacLeod didn’t have to make that task so much harder – and personal.

But will that same Nick MacLeod eventually remember that the pair met briefly ten years before, and back then there was no resentment or hostility, only a burning possibility of something special … something perfect?

Charlie Ahearn is not lucky in love.  Her last boyfriend used her PR skills to advance his own career and left her high and dry after a humiliating cheating scandal went public.  With no boyfriend, no job, and no reason to stay, Charlie packs her bags and moves home to Sydney.  As if the break up weren’t bad enough, Charlie now has her family worried over her lack of direction, lack of a job, and abundant baking.

As luck would have it, one of Charlie’s old friends has a job offer he’s all but begging her to take.  His company is expanding and with Charlie’s PR skills, she can help the company push their project through despite the objections and resistance of locals.  Charlie isn’t thrilled with the position nor the fact she must temporarily move, but it is a job and it gives her an income and keeps her family from worrying.  Kind of.

Charlie’s new job is a disaster from the very beginning: she’s now living in the middle of nowhere, many of the locals actively dislike her presence, and though she does her best to sell the party line and sway the locals, she’s getting nowhere fast.  In fact, on many occasions, Charlie’s office and vehicle are vandalized and her attempts at friendliness are met with cold shoulders and/or nasty words.  What’s more, the people who will speak kindly to Charlie seem to be genuinely nice people with real connections to their land and community.  The locals are already facing enough difficulties without Charlie’s company flinging around promises and projections that may never come to pass.

Remember I mentioned Charlie’s lack of luck in love?  As if the universe is just out to pick on her, one of the loudly-opposed-to-her-company locals is a man Charlie met only briefly more than a decade past.  At the time, Charlie and the mystery man shared a moment of intense connection, so intense, Charlie hasn’t forgotten him in ten years.  As the weeks pass by, Charlie struggles to do her job, do her job well, ignore the hot man who clearly dislikes her, and not bake so much that the part of town who will talk to her gains weight and quits talking to her.  To say Charlie is struggling would be an understatement.

As it happens, hot guy has a name and it’s Nick MacLeod.  Nick is devoted to his home, his farm, his community, and doesn’t want to see it destroyed by a big company with bad intentions.  Though Nick’s position doesn’t change once he meets Charlie (technically for the second time 😊) he does struggle with his feelings towards her.  Nick can clearly see Charlie is a good person, one he wants to get to know, who is stuck between a rock and a hard place.  Unfortunately, Nick’s passions tend to run high which often leave him with bad impressions and misunderstandings he is too stubborn to sort out.  Even more unfortunately, this situation crops up often where Charlie is concerned causing all sorts of hurt feelings, misunderstandings, and missed opportunities.

The Bottom Line:  I enjoyed the ever-loving crap out of this book!  Charlie is so easy to like and to root for, her sister Georgie is pure sunshine and delight, Nick is sexy and brooding, and the overall plot is just interesting.  Though this isn’t a pure past meets present read, there are elements of the trope which has long been one of my favorites.  I also very much like the opposite sides of an issue approach to friendship and romance which is a prevalent theme in this book.  In truth, the read is just one problem/complication/obstacle after another, but that’s what makes it so good.  With every new issue, there is a chance for growth and change in the characters and you know how I love my characters to evolve!  Not every situation and/or reaction to the situation works out perfectly, but that’s life and these characters and their struggles are clearly based on real life.  The only thing I found lacking in this book, is an epilogue.  If ever there was a story that needs a good what happened to them in the future epilogue, Worth Fighting For is it.  I am sincerely hoping the lack of an epilogue means this isn’t the end for Charlie and Nick but may be just the beginning of an ongoing series. There are plenty of other characters populating this book that could stand to have their story told in their own book 😊

← Review: What About Us (Book #4: Panic Series) by Sidney Halston
Excerpt: Fraud at Snowfields by Daniel Klock →