Review: What About Us (Book #4: Panic Series) by Sidney Halston

Posted on November 20, 2018 by rolopolobookblog 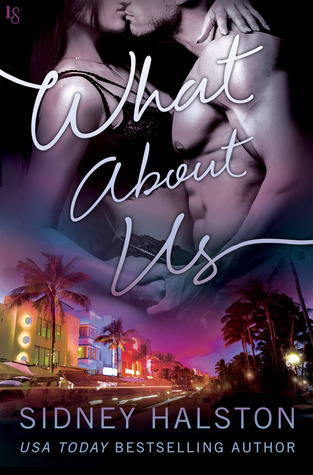 Alex: I hate doing business in clubs. Especially one like Duality. I’m here to seal a deal, not indulge in whatever hedonistic illusion they’re selling. Until, through all the skin and sex on display, I see her. Helen Blackwood. The girl who once filled my youthful fantasies, whose name is now synonymous with pain. Her father’s lies destroyed my family, leaving me with nothing to lose. And yet I can’t deny my electric response to her touch . . . or my urge to protect her when I see the bruise on her face.

Helen: Growing up, life prepared me for society galas and powerful men, not minimum-wage jobs or drunk exes with anger issues. But I’m a survivor. So here I am, practically naked, serving drinks at a Miami nightclub. I don’t mind the stares. Apparently, Alex Archer does. After twelve years, we aren’t exactly friends, but money is something we both understand. Something he knows I need. I’ll be his personal assistant, even if it means working with the man I hate . . . and the man I still want.

I read an early copy of What About Us and quite cleverly saved my notes from that initial reading.  Here’s what I discovered following my second reading: I LOVED this book just as much the second time around as I did the first time through.

What I thought and noted about this book initially holds true even after round two.  Here’s the low down from my original notes:

ALEX: Even with his crazy, often thoughtless comments, Alex is so likeable; in fact, he is my favorite character in this book.  I really felt Alex’s struggle and frustration with this inability to say what he means with Helen.  With that being said, I very much appreciated how Alex felt like he could be himself in all his glorious awkwardness with Helen, even when it meant having to apologize, and apologize often.

I like how shaken up Alex is by Helen!  Alex’s whole life was clear, defined, and ordered until Helen showed up again.  Helen’s reappearance took Alex’s goals, agendas, and general control of his life and shot it all to hell.  Talk about ass over tea kettle!  Causing Alex to reorder his life and break out of his rut is exactly what he needed!  Though his business goals are always going to be the same, his personal goals changed radically and that’s what he, as a character needed!

HELEN: Helen is one of my favorite character types; a lot of bad s*%t has happened to her, but she doesn’t feel sorry for herself.  In fact, after a tremendously bad period, Helen took what life handed her, dealt with it, and has made something of her life.  Though she doesn’t live to the standards she was once used to, she has a life she can mostly be proud of.  Mostly!

PLOT AND CONFLICT:  I absolutely love the relationship between Helen and Alex.  They have so much anger, misunderstanding, and miscommunication to overcome, but there is a base of love there too.  This story absolutely would not have worked if there weren’t a very real history between Helen and Alex.  One of my favorite parts of their relationship is how often they fight and make up.  So much conflict here!

This book reads exactly as it is meant to, slow and steady (in a GOOD way) with moments of crazy, both good and bad.  The entirety of this book revolves around Helen and Alex coming face to face with their past, dealing with some hard truths, and accepting how wrong they have both been.  That takes time and watching two people with such a complicated history get their s*%t squared away shouldn’t happen at the speed of light.  The characters and the plot demand a slow and steady pace and that is exactly what they have.

The fighting and making up worked so well in this story!  The sex is as explosive as the arguments and that always makes for a good time.  Helen’s acceptance of Alex and his awkwardness works well too; I like that she accepts him even in the moments when she is raging mad at him.  I also very much appreciate Alex’s self-doubt!  He is clearly a successful businessman with tons of confidence, but Helen rattles him, and he has to reassess how he deals with humanity.  This was helped along by Helen helping him get to know his staff which was a scene that really resonated with me.

In so many ways, the best part of this book involves the reactions Helen and Alex have to one another and the situation they find themselves in.  The plot initially asks Helen and Alex to react the way they would while still on their own, and then, to react as they should as a couple.  This is where we see a lot of character growth.  Alex must learn to think before he speaks, to accept that not every situation in life can be fixed with money, and Helen has to learn to accept help when and where it is offered.  Furthermore, we also see Helen and Alex having to get over themselves, really listen to the other person, and let go the awful past they both endured.

DIALOGUE: It’s funny how large a role dialogue plays in this book since Alex has such a terrible time with words.  You can see so much growth in Alex through the dialogue . . . . but, his fights with Helen and getting himself into trouble with his words were probably my favorite bits of dialogue.

I always love good dialogue and this book is filled with it!  I am particularly fond of the fight scenes as Helen and Alex both say a lot of stupid stuff and then must apologize for it later.  Probably my favorite bit of dialogue in the entire book is Helen’s response to the two uppity b%&ches who are talking about her in the bathroom during the gala; she held it together well and put them in their place.  I also liked it when Helen put Alex in his place 😊

PACING: This story is something of a slow burn read . . . . and that’s a good thing!  There are bursts of action and high drama, but much of the read a steady pace which allows the reader to watch two people figure out their lives together.  Outside of those few bursts of crazy, there doesn’t need to be a breakneck speed, rush to get to the end.  I appreciate how the pacing of this book matches the characters!

THE BOTTOM LINE:  At this point, do you really need the bottom line?? 😊  Clearly, I adored this book, it’s characters, and plot and make no bones about it.  Though I liked Helen quite a bit, Alex is hands down my favorite character.  His awkwardness, his nerdiness, his intellect, all wrapped in super sexy body is just too good to ignore.  At its core, this book is all about a complicated, complex relationship that is peppered with anger, hurt feelings, misunderstandings, and mistrust.  There is so much, emotionally speaking, that Alex and Helen must overcome to achieve their HEA and they sure work hard to do so.  I really did enjoy this story!  I didn’t rush through it but read it slowly and really savored this read.  In point of fact, my reading speed quite mimicked the overall pacing of the book.  I wouldn’t mind seeing Helen and Alex appear in later installments of the series.  Now that they are officially together, they feel like they can be a real powerhouse kind of couple, do a lot of good in their community/world.  In a lot of ways, I feel like this book is just the beginning of Alex and Helen’s story which is ironic, given their long history.

← Excerpt: Heart Full of Stars by Linda Govik
Review: Worth Fighting For by Susannah Turner →