Posted on August 13, 2018 by rolopolobookblog 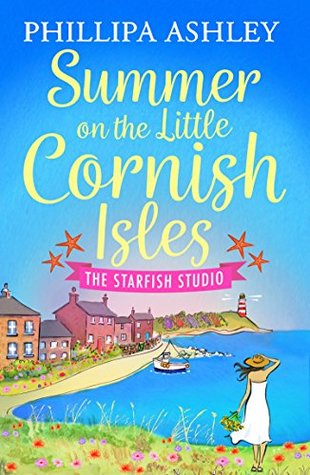 One summer can change everything …  Poppy has always loved Cornwall – the crisp sea air, the welcoming community. So when her boyfriend Dan suggests they leave their office jobs and take over the Starfish Studio on the Isles of Scilly, Poppy doesn’t need asking twice.  But things don’t go to plan when Dan dumps her, weeks before they’re due to move. Determined not to give up, Poppy accepts the help of local photographer Jake, her landlord’s grandson. But Jake is distracted by a loss from his past.  Can they turn the crumbling gallery into a success in time for tourist season? And will a summer on the little Cornish Isles mend just the studio – or Poppy’s heart too?

After a single visit, a magical visit, Poppy and her long-time boyfriend, Dan decided life on a small island running a gallery is just the life for them.  And so, after three years of plotting and planning and packing, everything is set.  Except . . . .

Nearly every resident of the small Isles of Scilly are expecting Poppy and Dan to arrive, bright-eyed and bushy tailed ready to take on the long-neglected Starfish Studio.  What the residents get is a bleary-eyed, seasick Poppy who has recently been dumped by her feckless and unfaithful boyfriend.  With little left in her, other than determination, Poppy is ready to take on the Starfish Studio and begin rebuilding her shattered life.  As her luck runs, Poppy finds the Starfish Studio is no condition to be re-opened anytime soon.  Poppy also finds a stunningly handsome man trying to make the best out of a bad situation.

Jake swore he would never set foot on the Isles of Scilly again!  After the tragic loss of his fiancé, Jake has kept to his promise by packing his days, weeks, and months with enough travel and work for three men.  Unfortunately, his time of running away from the past is over and he must return to the small island he once called home.  His grandfather’s Starfish Studio has been rented and in his grandfather’s absence, it’s Jake’s job to get the place in shape for the new renters.  Right up until the moment he meets Poppy, Jake is determined to fulfill his commitment and get the hell off the island.  Poppy, however, changes everything.

As Poppy and Jake soon figure out, life, and the universe often have plans that aren’t on an individual’s personal agenda.  Poppy wants to stand on her own two feet, but the Starfish Studio is a wreck and she needs help.  Jake wants to continue ignoring his pain and guilt, but Poppy needs help and he is more than capable of helping her.  With more than a bit of wariness, Poppy and Jake begin the arduous task of cleaning up the Starfish Studio and preparing it for a grand re-opening.  What the two find is an easy friendship, a lot of unexpected obstacles, some secrets from the past, and an attraction that shouldn’t be denied.

The Bottom Line:  I can’t say I jumped for joy over this light summer read, but I did like it.  The Starfish Studio is a rather typical recovering from tragedy romance with a woman scorned and a man running from his past.  Poppy and Jake are connected by sadness and a desire to help one another which ultimately helps each heal from their respective tragedies.  Along the way, friendship and love develop as both begin to reconcile their past and look forward to a bright and happy future.  In so many ways, this is a very typical sweet/low heat romance with a few twists and turns thrown in for good measure.  The Starfish Studio is the third book in a series and though I haven’t read the first two, I don’t feel like I missed anything or was confused by any of the characters, settings, and/or relationships.  I did buy the first two books and will eventually read them, but as I mentioned, I wasn’t jumping for joy over The Starfish Studio, so I don’t think there’s any rush to get caught up.

← Review: Tight Quarters (Book #6: Out of Uniform Series) by Annabeth Albert
Excerpt and Sweepstakes: Catch Him If You Can (Accidentally Yours Series) by Jennifer Shirk →