Posted on June 8, 2018 by rolopolobookblog 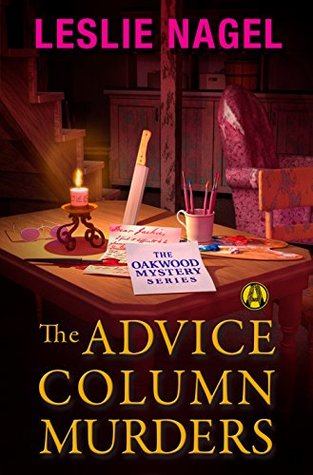 What’s the couple next door really hiding? Vintage fashionista and amateur sleuth Charley Carpenter finds out in this engrossing cozy mystery from the USA Today bestselling author of The Book Club Murders.  In a small town like Oakwood, Ohio, everyone knows everyone else’s business—except for Charley Carpenter’s standoffish new neighbors, who tend to keep to themselves. But behind closed doors, Paxton Sharpe’s habit of screaming bloody murder at all hours of the day keeps Charley awake all night. Coupled with the stress of the increasingly delayed expansion of her shop, Old Hat Vintage Fashions, the insomnia is driving Charley crazy. Her only distraction? The local paper’s irreverent new advice column, “Ask Jackie.”  Jackie’s biting commentary usually leaves Charley and her employees rolling on the floor, but her latest column is no laughing matter. An oddly phrased query hinting at a child in peril immediately puts Charley on high alert. After arriving home to a bloodcurdling scream next door, she follows the noise into the basement and makes a grisly discovery: the body of Judith Sharpe’s adult daughter.  With Detective Marcus Trenault off in Chicago, Charley decides to take matters into her own hands. Convinced that the murder is connected to the desperate plea for help in “Ask Jackie,” she embarks on a twisted investigation that has her keeping up with the Sharpes—before a killer strikes again.

Paxton Sharpe isn’t a nice man, his oldest son is rude, his stepdaughter is decidedly weird, his wife is somewhat pathetic, and the twins are just so sad.  Despite every effort, Charley hasn’t been able to make any headway with the Sharpe family.  She’s waved, said hello, tried to engage in conversation, but not a single Sharpe is having any of the friendliness.  In fact, all the Sharpe’s seem to want to do is be miserable.

As Charley soon discovers, the Sharpe’s are hiding all kinds of naughty and dangerous secrets, and those secrets result in two heinous murders.  Of course, Charley is going to poke around and ask some questions.  While she would normally be investigating the crimes with her boyfriend, the still luscious Marcus Trenault, Marcus is on the outs with his boss and has been banned from the case.  The problems seem to keep piling on, and on more than one occasion, Charley comes face-to-face with a few wretched cops who are hell-bent on getting it all wrong.  With the threat of imprisonment hanging over her head, the possibility of getting Marcus into serious trouble, and two murders to solve, Charley is up to her butt in drama yet again.

The Bottom Line:  Holy cats!!  This installment of the Oakwood Mysteries series took a turn toward the darker side and I LOVED IT!!  This is by far the darkest of the first three books and I really got into this story.  Charley has a hot mess of a family to deal with if she is going to unravel ALL the Sharpe family mysteries.  The family is sad, angry, resentful, and steeped in crap that all finally blows up like a huge volcano and Charley is in the thick of the lava flow.   What’s more, Charley’s personal life sees some HUGE changes in this read which creates even more of an emotional rollercoaster ride.  There really is a great deal of business being dealt with in this installment and I feel like it is really setting up the next several installments in the series.  That works for me!  The longer this series goes on and the more developed the characters become, the more I am digging it!