Review: The Queen’s Mary: In the Shadows of Power… by Sarah Gristwood

Posted on March 15, 2018 by rolopolobookblog 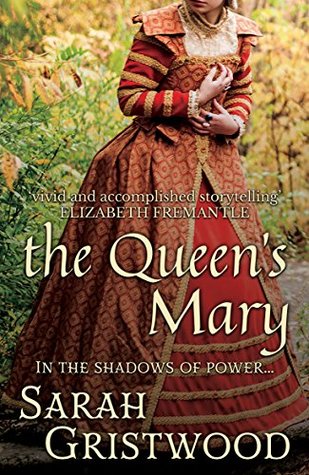 In 1548 four little girls, all called Mary, set sail from Scotland for France. Five years old, they are already primed for the work of their lifetime – to serve another little girl called Mary.

Thirteen years later, the five return to an unwelcoming Scotland, and as Queen Mary struggles to take control of her turbulent country, her famous ‘Four Marys’ are at her side.

The queen finds herself set on the path of violence and disaster which will lead eventually to her tragic end. But what of the other four Marys, bound inexorably to their mistress’ fate?

Of the four, it is Mary Seton who serves the queen longest, and whose loyalty is most severely tested. Through a maze of shadows – of treachery and even witchcraft – how can she find her own way ahead?

I’ve said it before and I’m saying it again, historical fiction isn’t an easy genre!  Bringing history to life while staying true to the historical documents and evidence is a monumental task and not every author is up to the task.

The Queen’s Mary is my first Sarah Gristwood read and I found myself somewhat on the fence with this one.  The opening is quite good with five Marys, the Queen of Scots and her four attendants, as children making their way toward France from their respective homes in Scotland.  There is something quite endearing and sad about these opening scenes as Queen Mary, clearly bred to her position and destiny holds sway over the other girls.  The four attendant Marys understand, even at this early age, their place, for the rest of their respective lives is with the Queen, making her life as comfortable as possible.  At such an early age, each of the girls understands, at least on some level, her life is no longer her own and she will serve as it pleases Queen Mary.

With more than a decade of education behind them and a stint in the French court, the five Marys find themselves on their way back to Scotland.  Queen Mary expects a warm welcome, but what she gets is a country sorely divided over religion, a half-brother more than willing to assume her role, a collection of noblemen looking to manage her, and a country of people who are wary of their French-educated, widowed Queen.  Settling back into life in Scotland, a country none of the women have seen in 13 years, isn’t going to be easy and if the Queen expects to rule her country, she’s going to need all the support she can muster.

Gristwood’s account of the next six years is filled with court intrigue, personal dramas, and political and religious upheavals.  While the Queen must be at the heart of every minute, it is her ladies who tell the story, who recount the moments and the drama.  In particular, it is Mary Seton, the one among the Marys who stays with Queen through the bitter end whose accounting of events we read.  While Mary Seton never expresses her opinions and/or fears publicly, she records for the reader, the doubts, the troubles, the moments of happiness, the uncertainty, the trials and tribulations of a troubled life, Queen, and reign.  While Seton always remains loyal to Queen Mary, she admirably conveys to the reader the constant tension and uncertainty that most certainly fueled every moment of the six years in Scotland.

The Bottom Line:  In all, I liked this read, but I wasn’t blown away.  If you take the time to read the author’s notes following the conclusion of the read, you discover how little, historically speaking, the author had to work with where the four Marys are concerned.  Most of the documentation and evidence deal exclusively with the Queen which means much had to be assumed on the part of the author where the other Marys are concerned.  I believe the author worked hard to stay as historically accurate as possible which is why the parts she had to assume (educated guess!) aren’t terribly exciting.  In fact, it is the not terribly exciting moments which have me on the fence with this book.  The middle of the book has many, many moments which drag by rather than being enlivened by the artist’s imagination.  I made it through The Queen’s Mary, liked it, and am willing to give the author another shot since I sincerely believe her creativity was hampered by so little historical information.  Sarah Gristwood is absolutely up to the historical fiction challenge and I will absolutely be diving into another of her offerings in the very near future.